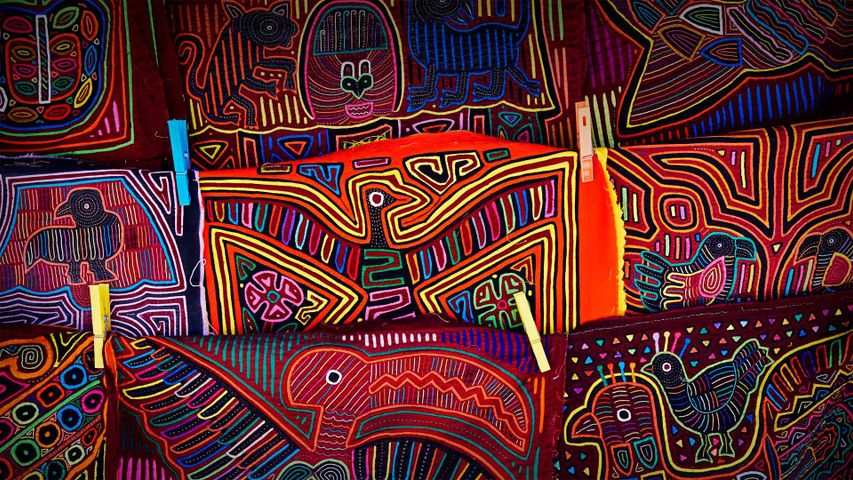 Is it possible for an article of clothing to express the essence of an entire people? Well, not usually, but for the indigenous Guna people of Panama, the colourful hand-woven textiles seen here may be an exception. Molas, which means ‘clothing’ in the Guna language, are traditionally displayed on both the front and back of women's blouses. Even today, many Guna women prefer to wear them over modern attire. The textiles often feature abstract geometric patterns, as well as images from nature such as turtles, flowers, birds, and fish.

Guna women of yesteryear were known to paint their bodies with those same geometric patterns and designs, and by the late 1800s they had begun weaving them onto cloth instead of painting themselves. Today, the production of molas is still generally done by women, who use an intricate process called reverse appliqué, where as many as seven layers of fabric are sewn together to form a panel, which is then hand-cut to create the vibrant designs.

But the importance of molas to the Guna people runs deeper than mere fashion. Forced from Colombia by Spanish colonists in the 16th century, the Guna endured an arduous migration before settling in Guna Yala, a semi-autonomous archipelago of coral islands in Panama. In the early 20th century, they again found themselves at odds with local authorities after the Panamanian government objected to their wearing of molas and other traditional garb as part of an attempt to ‘Westernise’ them. This resulted in an uprising in which the Guna finally won the political independence they enjoy today. To many Guna, the mola is not just a craft, but a symbol of their autonomy.