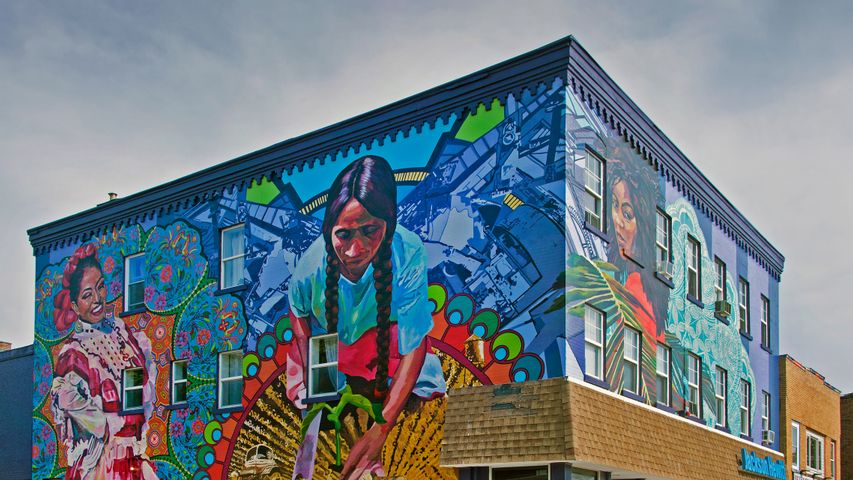 We're kicking off Hispanic Heritage Month with this beautiful mural celebrating the contributions made to the Buffalo, New York, region by the Hispanic and Latinx communities. Artist, community activist, and educator Betsy Casañas, with the assistance of many local artists, created this mural called 'Homeland, Perhaps It Is Because I Wish to See You Fly, That My Flight Continues to Be Yours.' Its subjects highlight local cultural heritage, including portrayals of agricultural production and industrial work. Through conversations with members of the community, Casañas incorporated symbolism inspired by the mixed and integrated Latinx community of Buffalo.

Hispanic Heritage Month, a celebration of Hispanic and Latinx contributions to the United States, takes place each year from September 15 to October 15. Why doesn't it start at the beginning of the month? Because September 15 and 16 are important dates for many Hispanic communities in the Americas. On September 15, 1821, five Central American nations (Costa Rica, El Salvador, Guatemala, Honduras, and Nicaragua) declared their independence from Spain, almost 11 years to the day (September 16, 1810) after Mexico had declared its independence. These countries were specifically mentioned when US President Lyndon Johnson proclaimed the enactment of what was then Hispanic Heritage Week. In the 1980s, the week became a month, and Belize (which had declared independence from the UK on September 21, 1981) was added to the list of celebrated nations.