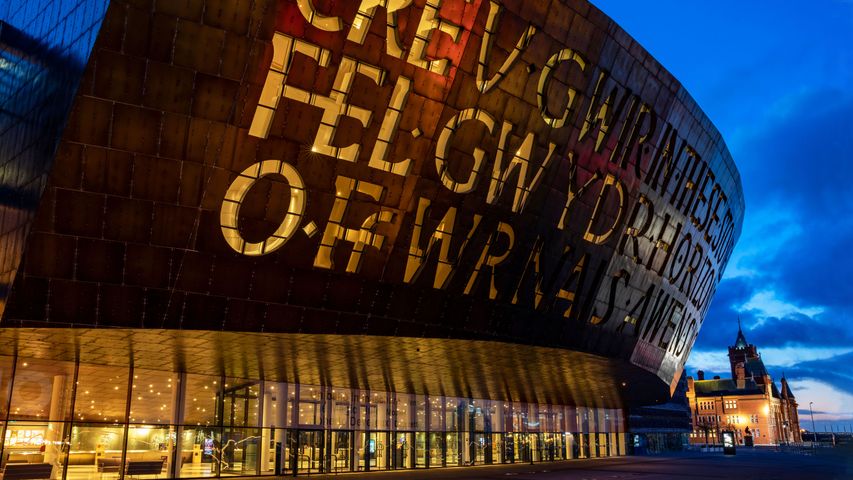 Dydd Gŵyl Dewi hapus! Or happy St David’s Day, when Wales’s patron saint is celebrated by the wearing of daffodils and leeks as well as concerts, parades and eisteddfodau – festivals of music and poetry. Today we’re in Cardiff Bay at the Wales Millennium Centre, one of the UK’s top cultural attractions and a quintessentially Welsh landmark.

The building takes inspiration from the country’s natural and industrial landscape; sea cliffs, forests, slate mines and the steel industry of South Wales. Its exterior was clad in 4,500 tonnes of steel treated with copper oxide and 2,000 tonnes of recycled slate, while inside five types of sustainable hardwood line the walls – all sourced in Wales.

Two inscriptions, one in Welsh, one in English, tower above the entrance in 6ft tall windows shaped like Celtic letters, a nod to the ancient tradition of stone carving. Written by the former national poet of Wales, Gwyneth Lewis, the Welsh half reads: “Creu Gwir Fel Gwydr O Ffwrnais Awen” (Creating truth like glass from inspiration’s furnace). The English half says: “In these stones horizons sing”, reflecting the venue’s role as the home of opera, musicals, orchestra and more in a country traditionally known as the Land of Song.