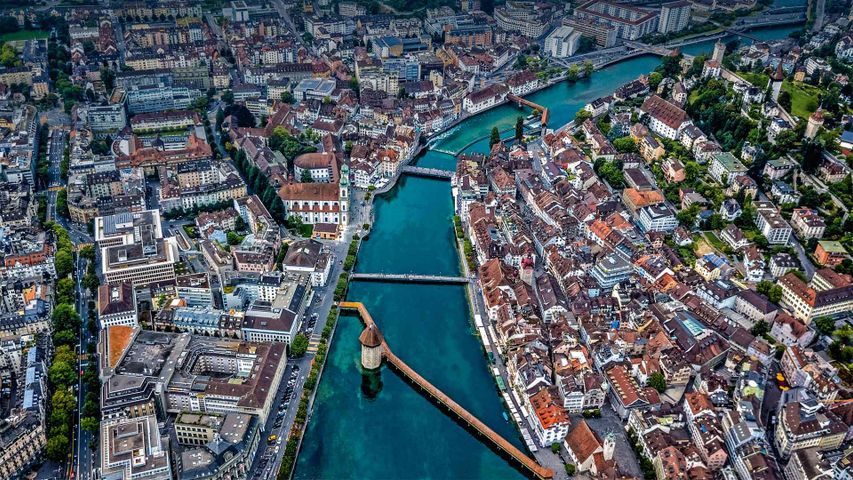 Chapel Bridge over the river Reuss in Lucerne, Switzerland

Info. Chapel Bridge over the river Reuss in Lucerne, Switzerland

We're looking down on the city of Lucerne, a charming waterfront setting along the shores of Lake Lucerne and the river Reuss. Surrounded by snow-capped mountains just out of frame, Lucerne is in the Swiss-German speaking part of central Switzerland and is divided into two parts linked by a series of bridges. The most famous of these bridges – the symbol of Lucerne – is the Kapellbrücke (Chapel Bridge), a covered wooden footbridge which you can see spanning diagonally across the Reuss in our photo. The building rising from the river next the footbridge is an old water tower, which has been used as a prison, torture chamber, local archive and treasury.

Originally built in 1333, Chapel Bridge connected the old town on the right bank of the Reuss to the new town on the left, defending the city from attack via Lake Lucerne to the south. It is believed to be the oldest covered wooden bridge in Europe, although much of it had to be replaced after a fire in 1993. Named after the nearby St. Peter's Chapel, Chapel Bridge has dozens of interior paintings on triangular panels underneath the bridge’s roof that date back to the 17th century. The paintings by local Catholic artist Hans Heinrich Wägmann depict historical events from the town, and despite the fire destroying most of the artwork, you can still view some of the original paintings when crossing the river.