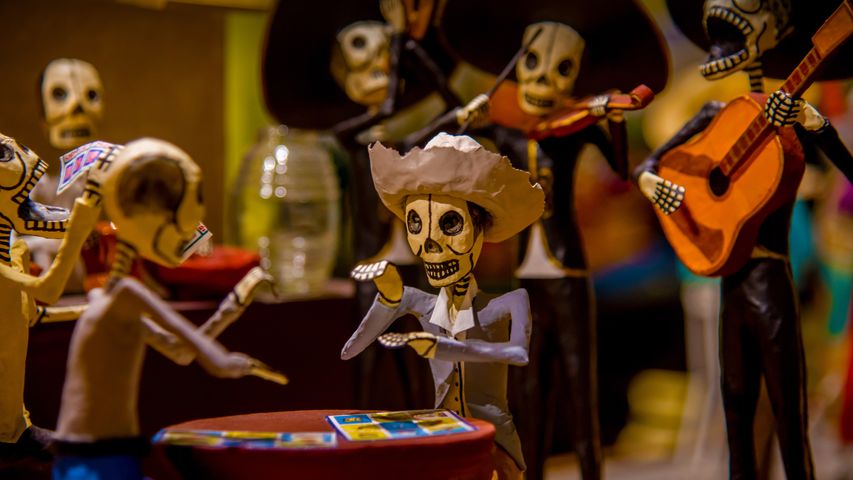 What are they celebrating?. Día de los Muertos celebrations in Mexico

It may seem odd to celebrate death—after all, it's the end of our personal era. But tell that to people who celebrate the Day of the Dead, or el Día de los Muertos, and they'll smile. They may explain that death is part of the circle of life, and as natural as any other human milestone. As our photo shows, the Day of the Dead is a big holiday in Mexico, where calacas—skeleton figures of musicians, workers, and other folks in merry scenes of everyday 'life'—lurk everywhere for weeks before the main event. Of course, living people also play dead for the day, donning skeleton outfits, masks, and grotesque makeup. Music, processions, and food add to the quirky, fun carnival atmosphere.

The Day of the Dead has deep roots in Mexico. In Aztec times, for example, the belief was that after people died, they traveled to the Land of the Dead, called Chicunamictlán. Mexico's pre-Hispanic beliefs eventually melded with Catholic celebrations of All Saints' Day and All Souls' Day to create the joyous event celebrated today. Families leave food or other gifts on their loved ones' graves or on homemade altars called 'ofrendas,' welcoming deceased relatives for the day. No wonder it's viewed as a happy holiday—you get to hang out with the spirits of the dearly loved people whom you've lost. (Just don't let Uncle Joe tell one of his jokes.)