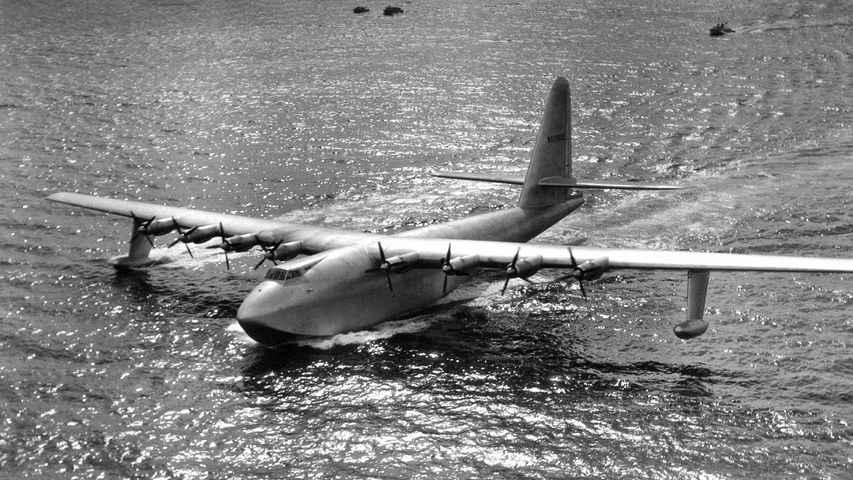 'If it's a failure, I'll probably leave this country'. 75th anniversary of the 'Spruce Goose'

Today we're looking back to a time when an eccentric billionaire's dream of reaching new heights was still a novel idea. It was 75 years ago today that Howard Hughes' 'flying boat,' dubbed the 'Spruce Goose,' made its one and only flight. Officially named the Hughes H-4 Hercules, the press persisted in calling it the 'Spruce Goose' even though it was constructed almost entirely of birch wood. The plane was commissioned in 1942 by American industrialist Henry Kaiser, who supplied ships to the US during World War II. Kaiser recruited Hughes—the film producer turned pilot, engineer, and business magnate—to build a flying cargo ship that could avoid German submarines while transporting troops and war supplies across the Atlantic. The contract called for three of the planes to be built within two years. Hughes was still working on the design when the war ended—in the end, he delivered only the one in our photo, two years after V-E Day.

Adjusted for inflation, the Spruce Goose cost roughly $213 million. It remains the largest flying boat ever built and when it was finished, it had the longest wingspan of any previously built aircraft at 320 feet, 11 inches. Even though the plane was no longer needed for the war effort, Hughes was committed to seeing it fly, which it did, but just barely. After liftoff, it flew at 135 mph roughly 70 feet above the water. It cruised for about a mile for a whopping 26 seconds. 'I put the sweat of my life into this thing,' Hughes had said just a few months prior, vowing to leave the country if it was a failure. Failure is in the eye of the beholder, however, as Hughes never left and his spending of government funds was considered reasonable, because, technically, the Spruce Goose did fly.