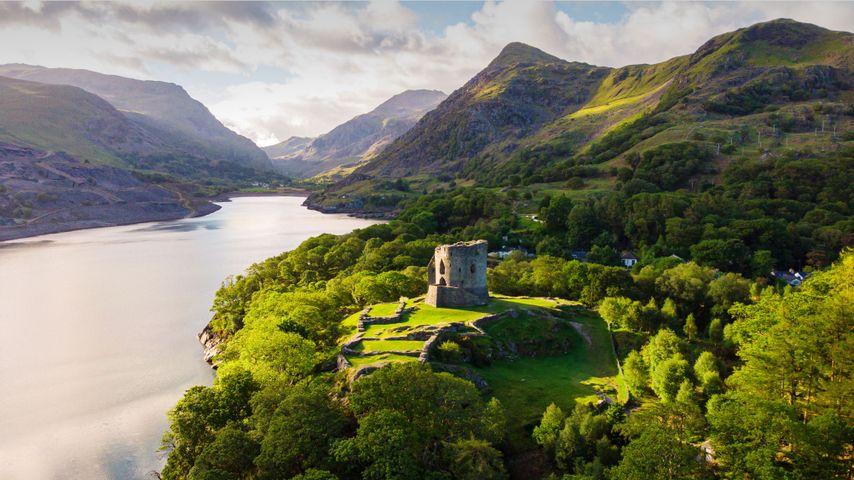 Welcome to the Llanberis Pass, the main route through the Welsh mountain massifs of Snowdon and Glyderau and home to the twin lakes of Llyn Peris and Llyn Padarn. Towering above them are the ruins of Dolbadarn Castle, a former stronghold of medieval Welsh princes and a favourite subject of 18th century landscape painters. Only the lowest foundations of its outer walls remain, but the magnificent 50ft (15.2m) high round keep still stands, the lone guardian of the mountain pass in this remote spot.

The castle is believed to have been built sometime around 1200 CE by Llywelyn the Great, king of Gwynedd – once an independent Welsh kingdom. Llywelyn’s grandson is thought to have imprisoned his brother Owain in the tower for more than 20 years after he took power – a tale that inspired an oil painting by the celebrated landscape painter JMW Turner in 1800. Dolbadarn was captured by the army of English king Edward I in the 1280s and its timbers would be used to help build one of Edward’s many Welsh castles at Caernafon. It would become a manor house for a while but, by the 1700s, had fallen into ruin.

These days, Dolbadarn is a Grade I listed building at the northern edge of Snowdonia National Park, a silent witness to the tumultuous history of this sweeping landscape in north Wales.