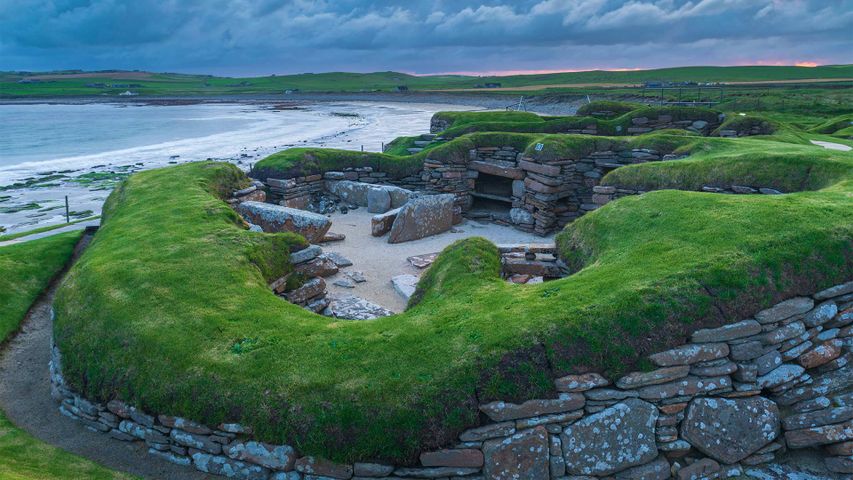 Who lived here?. The ancient stone homes of Skara Brae

This cluster of strange stone structures were part of the landscape here in the Bay of Skaill, Orkney, long before Stonehenge and the pyramids of Egypt were built. Skara Brae is the best-preserved example of a Neolithic (or new Stone Age) settlement in western Europe, thought to have been built and occupied sometime between 3000 and 2700 BCE. Around that time, people in Britain started farming and they began to build permanent homes.

These were usually constructed out of wood but in the Orkney Islands trees were few and these circular, one-roomed, homes were built using stone slabs instead. For reasons that are not clear, village life ended sometime around 2500 BCE and for centuries, the homes were hidden away, buried under earth until they were uncovered by a storm which hit Scotland in the winter of 1850. As well as the stone chambers, well-preserved stone furniture was found inside the homes, including beds, dressers and hearths - offering an unrivalled insight into what life was like here, 5,000 years ago.

The Neolithic period was also known for its huge stone circles and tombs and you can see those here too. Skara Brae is part of Unesco’s Heart of Neolithic Orkney World Heritage Site - alongside the Maes Howe chambered cairn, the Standing Stones of Stenness and the Ring of Brodgar stone circle. If digging up the past is your thing, the Festival of Archaeology runs from 17 July to 1 August in the UK, with scores of events planned to help discover historic (and prehistoric) sites in your local area.