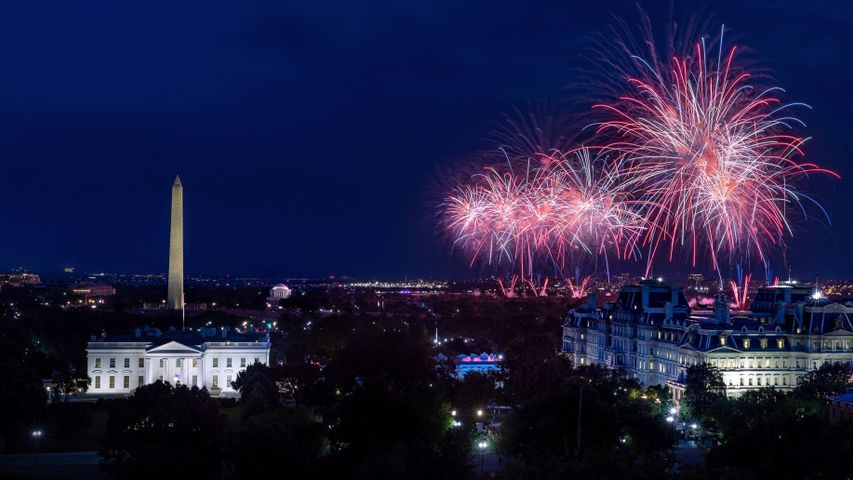 Happy birthday to us. Independence Day

Americans will spend this day in a myriad of ways, likely with others and likely outdoors. Many will be at carnivals and picnics, watching parades and listening to concerts. It's all in honor of the moment that the people of 13 far-flung colonies collectively declared they would become a united and independent nation, free of the rule of Great Britain and its monarch King George III across the Atlantic Ocean. For millions of Americans, Independence Day, or the Fourth of July, will end with the launching of fireworks over towns and cities, including the nation's capital of Washington, DC, shown here with the White House and the Washington Monument illuminated.

The Fourth of July is the date in 1776 that the Declaration of Independence was ratified by the Second Continental Congress, although it officially approved a resolution to split from Britain two days earlier on July 2. As president of the Congress, John Hancock signed the declaration first. His signature appears very large on the document, and to this day his name is shorthand for any type of signature. He and Thomas Jefferson, John Adams, and Benjamin Franklin all claimed to have signed on July 4, 1776, although that assertion has been debated. Jefferson was the principal author of the document. Most of the 56 signers of the Declaration of Independence signed a month later, an act that risked conviction of treason and punishment by death.

The American rebellion for independence ignited revolutions around the world, most notably the French Revolution, and shortly thereafter the Haitian Revolution, in which slaves successfully led an insurrection against French rule in the colony of Saint-Domingue, now Haiti. That inspired other Latin American colonies to fight for their independence from European powers. American independence was a contagion of freedom. You could say that colonialism, although its legacy remains today, began its descent in 1776, something we can all take to heart as we watch the night sky light up tonight.