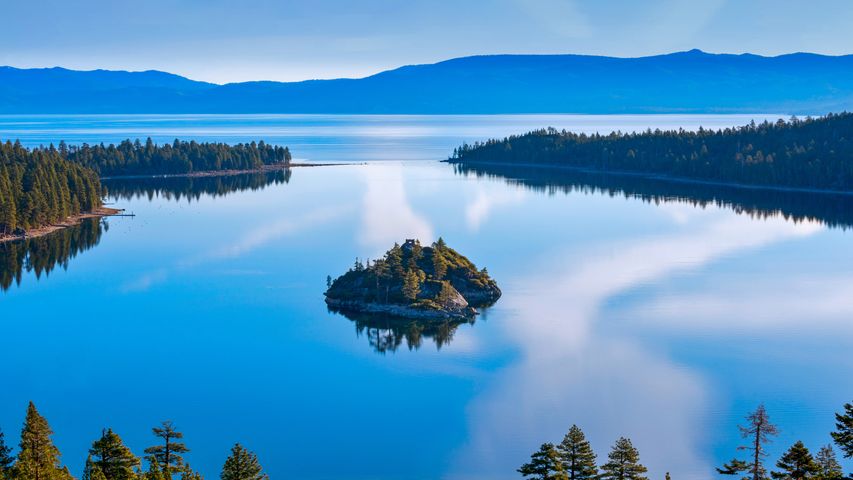 This island is more than a mile high. Fannette Island, Lake Tahoe

Tucked into a tiny bay of a grand alpine lake is this granite bump called Fannette Island, the only island in Lake Tahoe. The massive lake lies in the Sierra Nevada at an altitude of 6,225 feet, straddling the state line between California to the west and Nevada to the east with near perfect symmetry. Fannette Island is in Emerald Bay, on the California side of Tahoe's southwest shore. A narrow inlet, seen here at the top center of this image, connects Emerald Bay to the rest of the lake, whose natural beauty draws visitors in all seasons of the year.

Lake Tahoe is known as a mecca for boaters and skiers and even gamblers who flock to the several casinos found on its shores. Its frigid alpine water is renowned for clarity. Despite cold winter temperatures that provide the surrounding ski resorts with ample snowpack, the lake never freezes. The largest alpine lake in North America, Tahoe rivals even the Great Lakes by volume because it is so deep.

Ice Age glaciers, nature's master sculptors, carved out Emerald Bay eons ago. For some reason, they left behind in their wake tiny Fannette Island. It was known by a half dozen names over the last century before Fannette finally stuck. A short hike to the top, 150 feet above the water, will take you to the ruins of an old stone building called the 'Tea House,' constructed in the 1920s by the former owner of the island as well as a nearby estate on Emerald Bay called Vikingsholm (the property is now owned by the state and is a popular feature of Emerald Bay State Park). The Tea House was used for exactly that, intimate tea parties in surroundings that would be nearly impossible to duplicate in any other home. While tea is no longer served atop the island, the alpine vistas are still there for the taking.