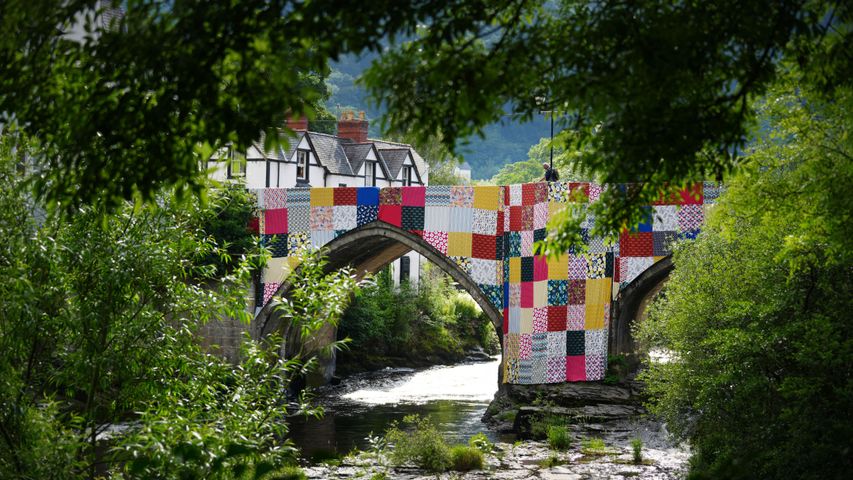 This colourful summer scene comes to us from Llangollen on the banks of the River Dee in Denbighshire. This pretty Welsh town has a worldwide reputation for its International Musical Eisteddfod, a cultural festival celebrating traditional and contemporary music from around the world. It is celebrating its 75th anniversary in July with a full return to live events, having had to scale things back during the Covid pandemic.

Last year, with much of the programme moving online, the festival commissioned a patchwork installation called Bridges, Not Walls from artist Luke Jerram, to cover the town’s 16th Century bridge. Patchwork has long been a part of Welsh craft culture and of the 1,000 or so patches that were stitched together to cover the nearly 200ft (60m) long bridge, more than 100 were designed by local people and others from around the world.

Situated in an Area of Outstanding Natural Beauty, Llangollen also sits within a Unesco World Heritage Site along eleven miles of canal around the Pontcysyllte Aqueduct. Its famous Eisteddfod was established in the summer of 1947, in the aftermath of World War Two and was intended to spread a message of peace and friendship. In 1955 a 19-year-old Luciano Pavarotti performed here with his father as part of the Chorus Rossini choir, which went on to win the choral competition. 75 years after it was founded, the Eisteddfod continues to welcome thousands of performers from around the world who sing, dance and compete in a musical spectacle which attracts up to 35,000 visitors each year.