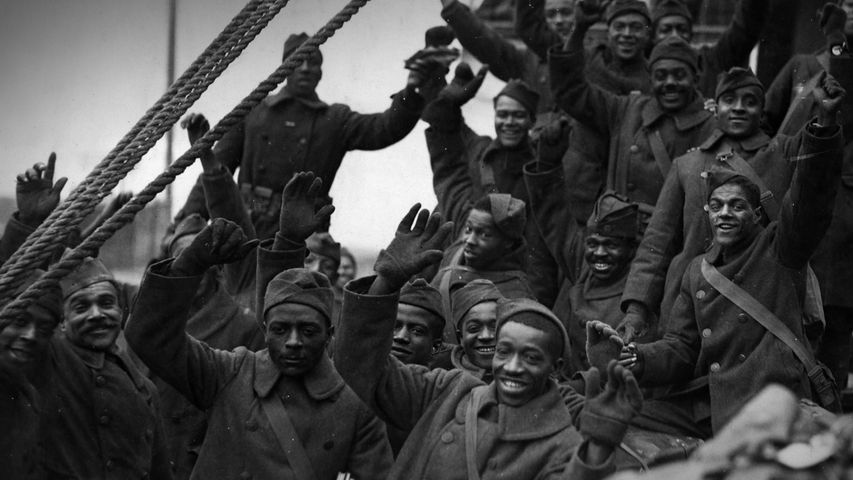 What are these soldiers celebrating?. Black History Month

To mark the beginning of Black History Month, we're paying tribute to one of the few all-Black combat regiments in World War I, true heroes who were instrumental in achieving the Allied victory. The storied 369th Infantry Regiment, famously known as the Harlem Hellfighters, served in frontline trenches for 191 days—longer than any other American unit in the war—and suffered 1,500 casualties, the most losses of any American regiment. They fought under the 16th Division of the French army, because many white Americans refused to go into combat alongside Black soldiers.

But the men of the 369th quickly proved their bravery and combat skills. Their heroism in battle earned them the respect of their French comrades, who awarded them—before any other American unit—the prestigious Croix de Guerre, France's highest award for bravery. It also earned them the fear of the enemy—media reports credited the Germans for bestowing their nickname, 'Hollenkampfer,' or 'Hellfighters.'

Soldiers of the 369th are pictured here on February 17, 1919, on their victorious return to New York City after the war. Around 250,000 people gathered to greet them. Accompanied by music from the Hellfighters band, led by James Reese Europe, they paraded north from Fifth Avenue at 23rd Street to 145th and Lenox in Harlem. Around 70% of the regiment's members called Harlem home, and their family, friends, and neighbors were among those cheering their return. On this day during a month that would eventually be set aside for Black history, these soldiers were given a hero's welcome. A few months later, as General John J. Pershing led soldiers along Fifth Avenue in a much larger victory parade, not one Black soldier was honored. Despite the sacrifice and bravery of the Harlem Hellfighters, the country remained segregated, both in its military and its society writ large.