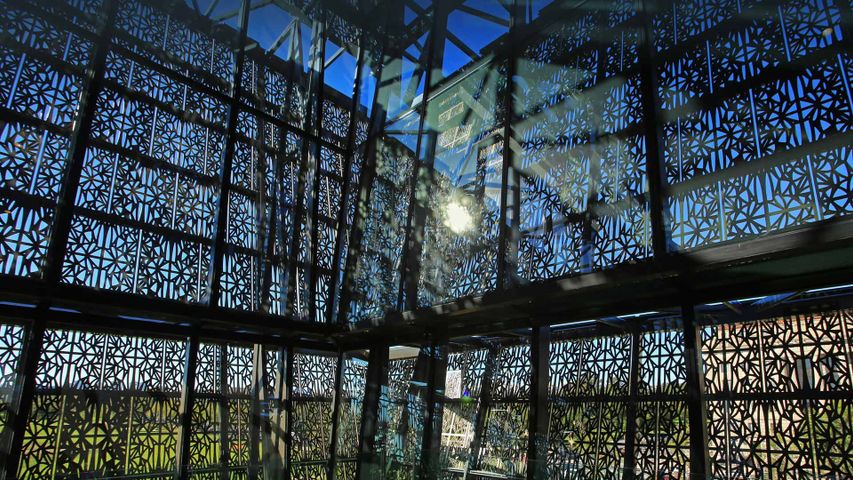 Join the Smithsonian as we celebrate Black History Month with the help of our National Museum of African American History and Culture (NMAAHC). This stunning image of the museum looks out through its intricate, bronze-colored façade to the National Mall. The museum’s breathtaking exterior, a corona rising in three dramatic tiers, evokes the crowns found in the Yoruba art of West Africa, and its ornate design echoes the decorative ironwork found in the American South, often forged by African American slaves and freed Black Americans. The façade allows natural light to filter into the museum while also protecting artifacts on display from direct sunlight and glare.

For a century, people dreamed of a place on the National Mall to commemorate the contributions of African Americans. It began with Black Civil War veterans and continued with champions of the project like US Rep. John Lewis. The dream was realized in 2016 when NMAAHC finally opened. It tells the story of America through an African American lens with a robust collection of artifacts, programs, and educational material. While helping create the museum as its founding director, I heeded the words of the African American scholar and creator of Black History Month, Carter G. Woodson, who said, 'The only reason I do history is to make America better.'

When Woodson and the Association for the Study of Negro Life and History declared that 'Negro History Week' would be celebrated the second week of February 1926, they continued a long tradition of Black communities recognizing the month that contains the birthdays of Abraham Lincoln (February 12) and Frederick Douglass (February 14). In 1976, the observance was expanded to the entire month and was celebrated throughout the country. Today, the opportunities to study African American history are more abundant than ever. And Black History Month is just as relevant as it was when Woodson created it, because there is no more powerful force than a people steeped in their history, and no higher cause than honoring the struggle of our ancestors by remembering. – Lonnie G. Bunch III, Smithsonian Secretary