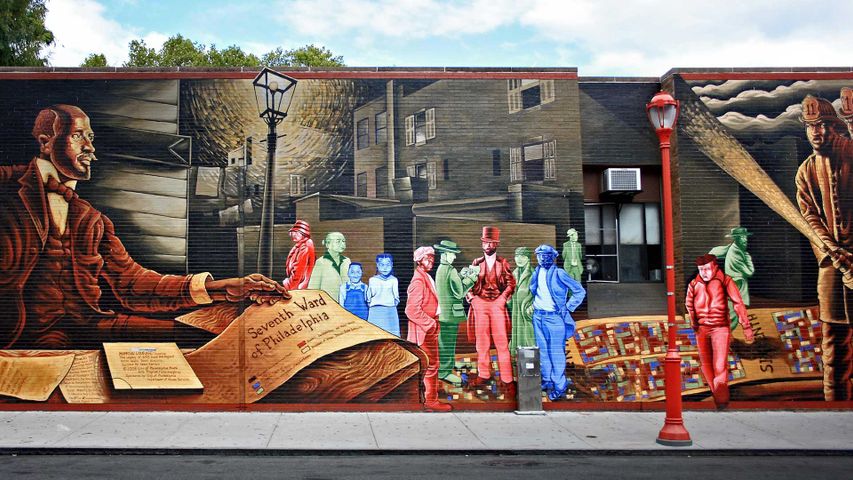 Mapping courage in the Seventh Ward

To mark the beginning of Black History Month, we're visiting a highlight of Philadelphia's famous Mural Mile. The larger-than-life figure depicted on the left in this mural is W.E.B. Du Bois, trailblazing scholar, sociologist, author, and co-founder of the National Association for the Advancement of Colored People. It was here, in Philadelphia's Seventh Ward neighborhood during the late 1890s, that Du Bois conducted a comprehensive study of an African American community. He used methodologies—including detailed data visualizations—that were decades ahead of his time, mapping out every household and documenting the challenges that residents encountered as they tried to achieve success and happiness in the decades after Reconstruction and the dawn of the Jim Crow era.

In 1899 the University of Pennsylvania Press published the results of Du Bois' study, 'The Philadelphia Negro,' now considered a classic in social science literature. Look closely at the mural and you'll see Du Bois again as a younger man standing among residents at the former home of Engine #11, Philadelphia's first African American firehouse. The mural is just one of dozens of public art projects that Philadelphia Mural Arts produces each year. The works engage local communities by beautifying neighborhoods while drawing on shared experiences and contributions. We think Du Bois would approve.