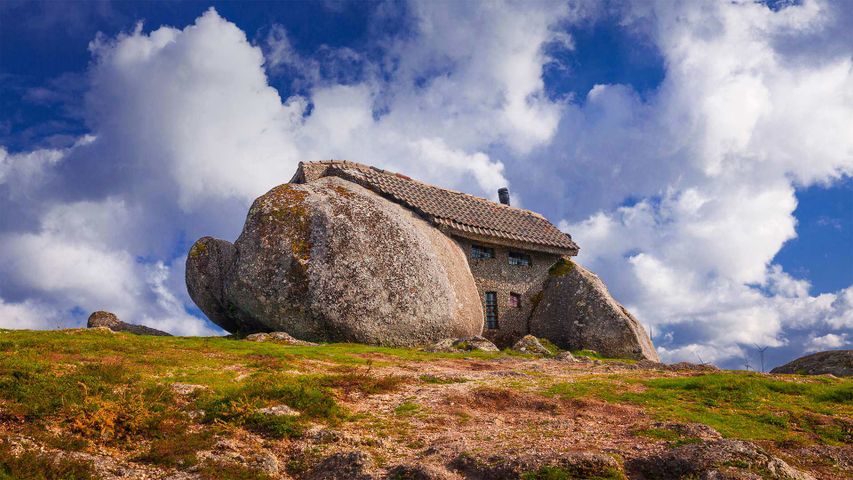 This rock-solid house in the Fafe mountains of northwest Portugal looks like it could be the home of a modern Stone Age family. Known locally as Casa do Penedo (House of the Rock), its prehistoric appearance has drawn comparisons to the Flintstones' dwelling in the fictional town of Bedrock. But the secluded stone structure on our homepage is very much real—it was built as a rural retreat in the Portuguese countryside in the 1970s. The building is sandwiched between four boulders that serve as the foundation, walls, and ceiling of the house, blending in as part of the beautiful natural landscape.

It may appear small on the outside, but inside there are two floors, comprising a kitchen, living room, bathroom, and bedrooms—just enough space for a family and their pet dinosaur. Many of the rustic fittings, including furniture, stairs, and handrails, are made of logs. There's no electricity, but there is a stone fireplace and even a small swimming pool carved into a rock on the boulder-strewn property. The quirkiness of the building has attracted plenty of curious visitors over the years, leaving the owners between a rock and a hard place. Due to an influx of tourists, Casa do Penedo can no longer be used as a peaceful getaway and has even been equipped with bulletproof windows and a steel door to fend off vandals. Today it functions as a small museum with relics and photographs from the house's history.