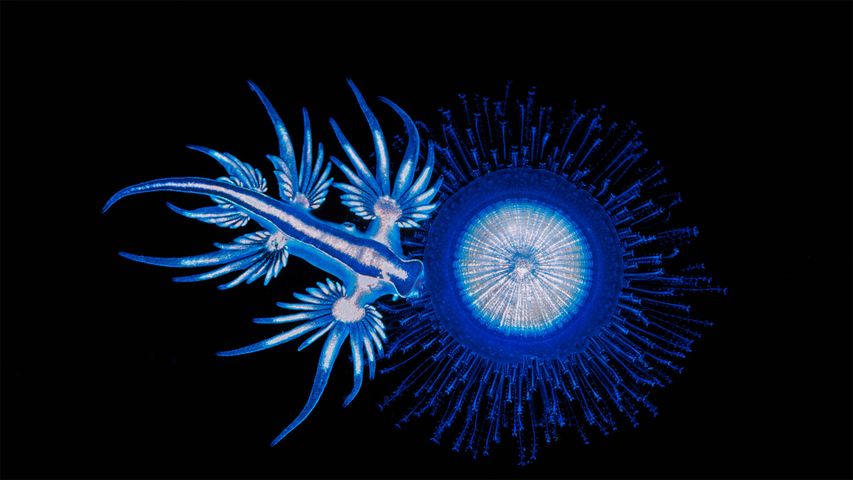 What are these creatures?

No, this isn't a still image from a sci-fi space opera. We're offshore of Coffs Harbour, New South Wales, Australia, watching a Glaucus atlanticus, aka 'sea swallow' or 'blue sea dragon,' snack on the poisonous tentacles of a Porpita porpita, aka 'blue button.' At the tips of the blue button's tentacles are stinging cells called nematocysts, but the venom doesn't deter the sea swallow. Instead, once the sea swallow ingests the blue button's poison, it stores the venom in the tips of its own feather-like fingers called papillae. Would-be predators should think twice before biting the sea swallow. The poison concentrated in its papillae can kill a predator in seconds. If you come across either of these creatures washed ashore, don't touch! While the stings aren't deadly to humans, they can cause skin irritation.

You can't tell from this picture, but both of these sea creatures are tiny (about an inch long) and get around by floating on ocean currents. They're both also vibrant shades of blue to help camouflage them from predators. Of course, camouflage didn't keep this blue button safe from the sea swallow. Dinner time!

Black-breasted Pipefish, St. Johns Reefs in the Red Sea off the coast of Egypt