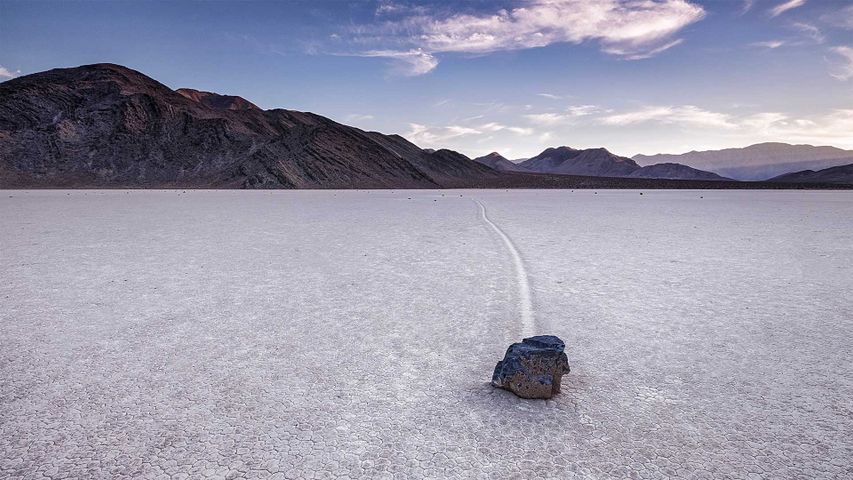 Rocks on the move

No, that stone in today's homepage image didn't get there by itself. Or did it? Not only is Death Valley one of the hottest places on Earth, it also boasts a mysterious geologic phenomenon—rocks that drift across the exceptionally flat desert floor, seemingly under their own power. The rocks here at Death Valley's Racetrack Playa are known as 'sailing stones' and they can vary in size from a few ounces to hundreds of pounds. As seen in our image, the stones leave long trails behind them as they move across the scenic dry lakebed.

Accounts of the stone trails emerged in the early 1900s, but no one knew just how the stones managed to have apparently 'sailed' across Racetrack Playa without someone to push them along. Because they'd never been seen moving, the sailing stones gave rise to many wild theories to explain their mobility. Then, in 2014, scientists captured the movement of the stones for the first time using time-lapse photography, and the mystery was finally solved: The stones move only with the perfect balance of melting ice, water, and wind. One day that winter of 2014, rain had formed a shallow pond that froze overnight. When it thawed in the next day's sun, the very thin ice sheet melted and cracked into floating panels. Driven by a light wind, these sheets accumulated behind the stones, and very slowly pushed them forward.