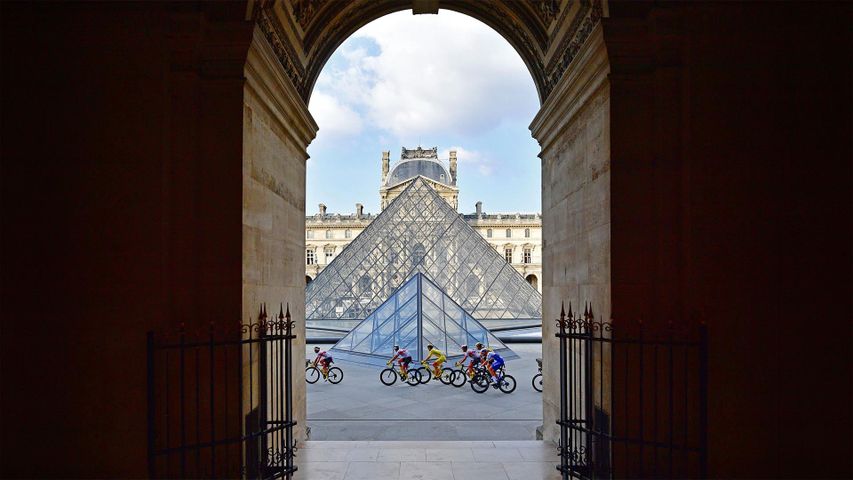 After a three-week jaunt around France, cycling’s most prestigious race concludes today with a triumphant procession into Paris before a sprint finish on the iconic Champs-Élysées. The 21st and final stage of this year’s Tour de France–the 108th edition of the famous event–begins in Chatou, a town in the western suburbs of Paris along the river Seine. Tour tradition dictates the overall race leader isn't challenged on the last day, so it starts out as a victory parade for the champion-elect, who will be wearing a yellow jersey, posing for pictures, and sipping a glass of champagne along the route. But when the riders reach the heart of Paris, the pace picks up as they dash around the Champs-Élysées, a tree-lined promenade often described as the 'most beautiful avenue in the world.'

The peloton–a large group of riders bunched together–enters the Champs-Élysées via the courtyards of the Louvre Palace, passing directly by its famous glass pyramid, as shown on our homepage. They then complete an eight-lap circuit, which takes them on a sightseeing tour around the Arc de Triomphe, past the Tuileries Garden, across the Place de la Concorde–the largest square in Paris–and back up the cobblestones of the Champs-Élysées, which is French for “Elysian Fields,” the final resting place for heroes from Greek mythology. Quite the place then to finish a relentless race that covers 3,500 kilometres and includes brutal climbs in the Alps and the Pyrenees. Chapeau!