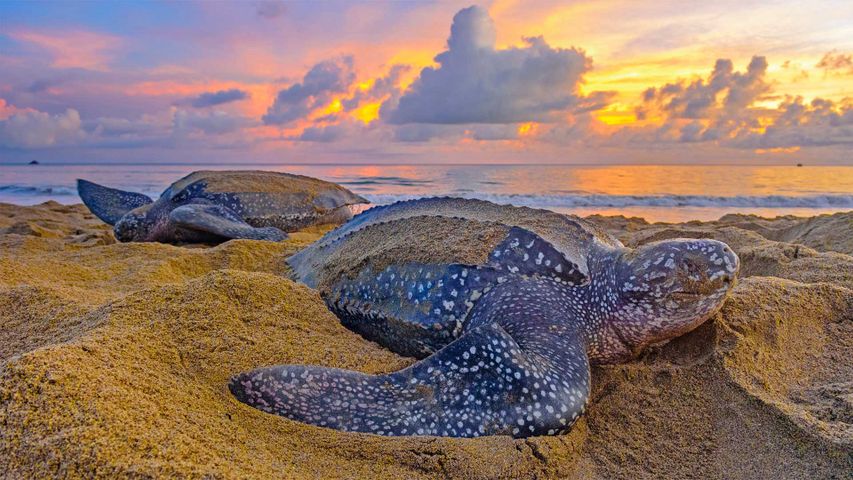 This time of year is nesting season for leatherback sea turtles in the Atlantic. After mating at sea, these big mamas—leatherbacks are the largest of all turtles—haul themselves up onto beaches in the same region where they were born. The turtles dig out nests in the sand and lay a clutch of about 80 fertilized eggs the size of billiard balls. They'll repeat this ritual a few more times before returning to their migratory lives in the open ocean. About 65 days later, turtle hatchlings will start to poke up through the sand and make a dash toward the safety of the sea. But the odds are against them: Only one percent of the hatchlings will live to reach sexual maturity, at around 16 years old.The leatherbacks on our homepage today are in Trinidad and Tobago. The protected beaches of this island nation compose one of the most important nesting areas in the world for this endangered turtle. Scientists believe there are between 34,000 and 36,000 nesting females left worldwide, a big drop since 1980 when estimates put their population at about 115,000. (Male leatherbacks spend their entire lives at sea, so their numbers are harder to track.) Loss of habitat, fishing bycatch, and egg poaching are all blamed for the decline. The populations in the eastern and western Pacific are most at-risk for extinction, while the numbers of the Atlantic subgroup have stabilized in recent years.