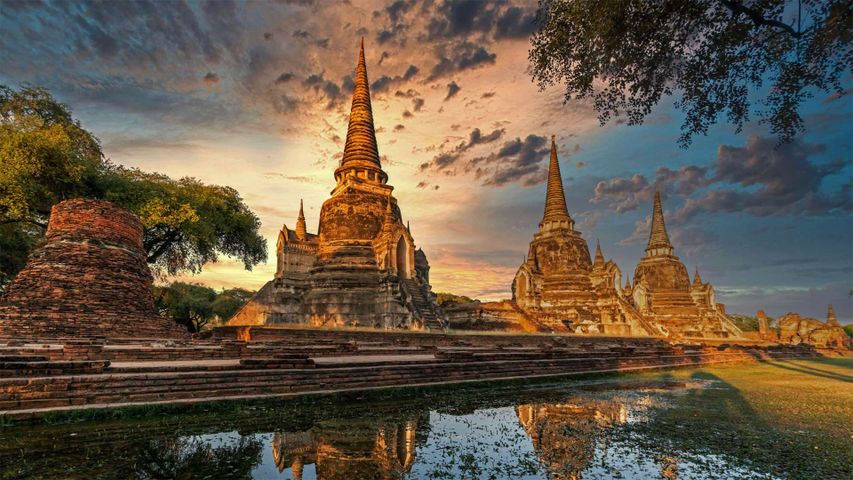 In present-day Thailand sit the ruins of the ancient kingdom that preceded it, Ayutthaya. Wat Phra Si Sanpet, shown here, was the holiest site in the capital of that kingdom, a royal temple containing a 52ft (16m) golden Buddha, among other treasures. The first king of Ayutthaya, Ramathibodi I, ordered construction of a royal palace here in 1350. Nearly a century later, the palace was moved to a different location in the city and the former palace grounds were converted into a holy site.

The three structures shown are called chedis, bell-like structures, topped with miniature chedis on their roofs. After serving as the seat of the kingdom for 417 years, the capital city of Ayutthaya was sacked in 1767 by the invading Burmese, who melted down the copious gold of the temples and palaces, then set the buildings on fire. All but these three chedis were completely destroyed, and over time they fell into ruin. Restoration began on the chedis in 1956, but only the foundations of the rest of the complex remain.

We’re featuring these ruins because today is Songkran, Thailand’s traditional (although not official) New Year and very popular water festival. What began as a ritual of pouring water over statues of Buddhas and each other to signify purification and wash away sin and bad luck, has become a good-natured water battle enjoyed across the nation over several days.

Vinyl records in Rosmalen, the Netherlands