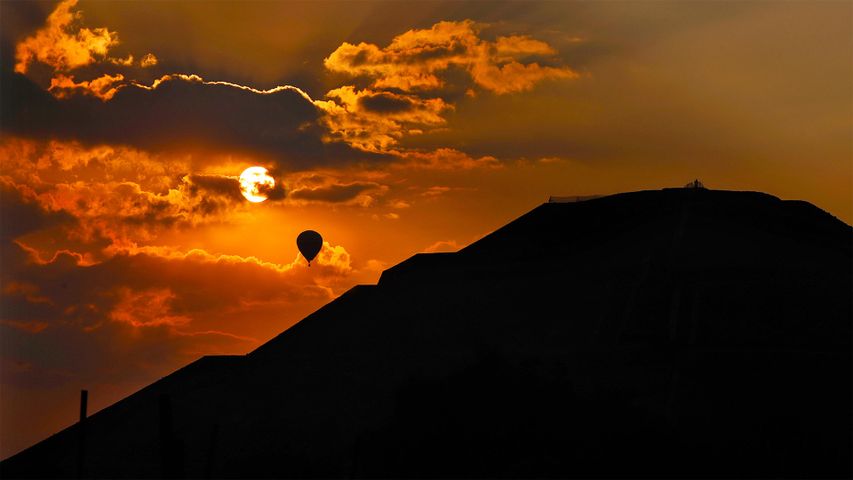 Ringing in the New Year at Teotihuacan

If the Aztecs had hot air balloons, they may well have greeted the new year like this—floating above the massive Sun Pyramid at sunrise today, the first day of the year according to the Aztec calendar. Also known as Yancuic Xihuitl, the Aztec New Year is still celebrated by some Indigenous Nahua communities in central Mexico with songs, dances, and the flames of 'ocote' (pitch-pine) candles. Dancers wear colourful traditional costumes topped by quetzal feather headdresses, and celebrants greet the New Year by making loud noises with seashells, just as Aztecs did centuries ago. It's one of the many expressions of pre-Columbian tradition that managed to survive the Spanish conquest and modern erosion of Indigenous customs.

The Sun Pyramid is the largest structure in the ancient city that Aztecs called Teotihuacan (which means, roughly, 'birthplace of the gods'). The site also contains other important pyramids, plazas, temples, palaces, and a complex network of underground tunnels. As grand a city as it once was, when the Aztecs arrived here in the 1400s, Teotihuacan had been abandoned for centuries. Its precise origins are a mystery, but it was first built by an unknown civilization sometime around 400 BCE. By 400 CE, Teotihuacan had become a center of industry and trade, the largest and most powerful city in the Americas, and probably the sixth-largest in the world. But by around 550 CE, its major monuments were sacked and deliberately burned, the magnificent pyramids and temples deserted — at least until the Aztecs arrived.

The ancient architecture of temples on Hemakuta Hill in Hampi, India