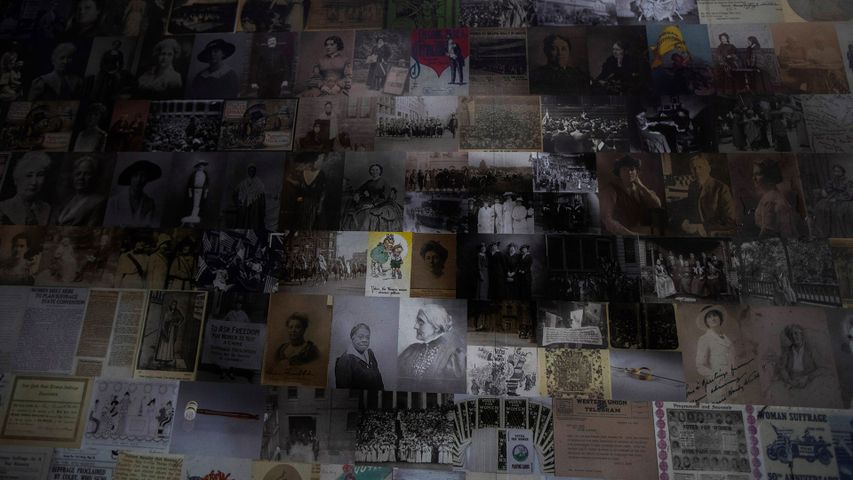 Gazing upon 'Portraits of Change'

For the start of Women's History Month, we've come to Union Station in Washington, DC, to view a mosaic of historical photographs of thousands of American women who fought to win voting rights. The ratification of the 19th Amendment, on August 18, 1920, finally secured the legal right of women to vote, but this mainly benefited white women. Despite heroic contributions to achieve suffrage, Black, Indigenous, and other women of color continued to face barriers to voting in the form of poll taxes, restrictive local laws, and hostile intimidation. This mosaic, called 'Our Story: Portraits of Change,' attempts to show a more complex history of the fight for American women's right to vote.

We're seeing just a small detail of the mosaic—in all, some 5,000 photographs were spread across 1,000 square feet on the terminal floor in August to mark the 100th anniversary of women's suffrage. When viewers stepped back to observe the mosaic from a distance, they saw a very large portrait of African American suffragist and anti-lynching activist Ida B. Wells. (Click on the image above to see the full portrait.) The detail here depicts one of Wells' eyes.

As a journalist and publisher, Wells was an unflinching critic of racial injustice, particularly lynching. She faced racial discrimination and prejudice in the broader society, but also within the suffrage movement itself. Today she's recognized as a towering civil rights activist, and in 2020 the Pulitzer Prize posthumously honored Wells for her 'outstanding and courageous reporting on the horrific and vicious violence against African Americans.'