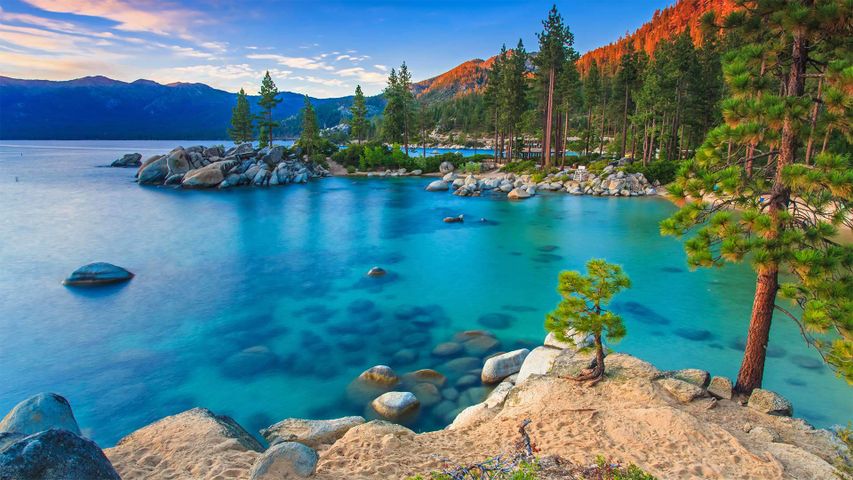 The Big Blue of the Sierras

High in the Sierra Nevada mountain range, straddling the border between Nevada and California, you’ll find the largest alpine lake in North America, Lake Tahoe - sometimes called Big Blue. 115 kilometres in circumference, with an average depth of 300 metres, it has the sixth-largest volume of any lake in the US - only the Great Lakes are larger. For at least 6,000 years, the territory of the Washoe people centred around Lake Tahoe, but the arrival of non-native people in the 19th century led to a series of armed conflicts and eventual loss of land to farms and townships.

The lake has a long history of disputes. Even its name wasn’t formally agreed upon until 1945. Since the first European-American saw it in 1844, it has been called Lake Bonpland, Mountain Lake, Fremont’s Lake, Fallen Leaf Lake, Maheon Lake, and Lake Bigler, after California’s third governor and noted Confederate sympathiser, John Bigler. It was that name that Lake Tahoe finally supplanted on maps starting in 1862. But not everyone was enamoured of the new moniker. American writer Mark Twain famously criticised it as an 'unmusical cognomen' and that it should retain the name Bigler 'until some name less flat, insipid and spooney than Tahoe is invented for it'. Apparently, we’re still waiting.

Trevi, Umbria, Italy, with almond flowers in the foreground