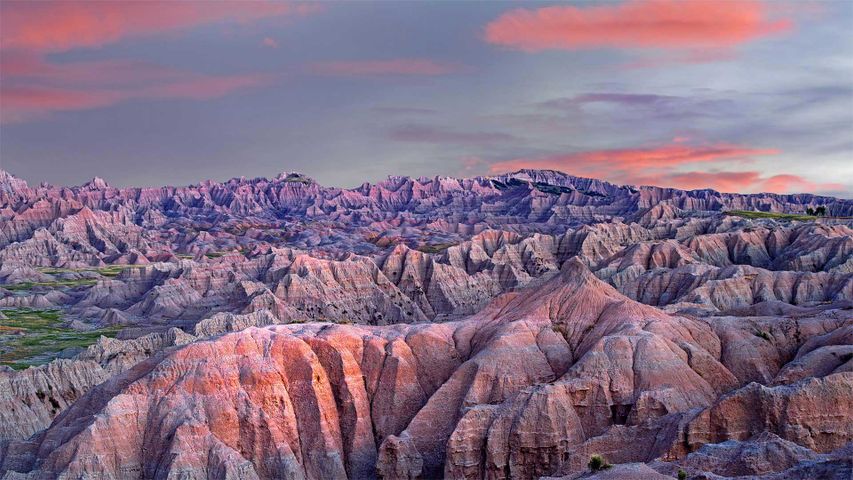 Heading west on Interstate 90, peek out the driver's side when you're about three-quarters of the way across South Dakota. It's the first clue you've entered the Wild West: the expansive, layered landscape of Badlands National Park. It's enjoyed government protection since 1939, first as a national monument and more completely after it was upgraded to national park status on this day in 1978. The park protects 244,000 acres of dramatically eroded bedrock replete with fossil beds—as well as the nation's largest mixed-grass prairie, hosting bison, prairie dogs, and endangered black-footed ferrets.

Before it was a national park, Native Americans called the Badlands home for more than 10,000 years. The Lakota had displaced other tribes to control the region by about 150 years ago—the same time settlers from the East were undermining Native power structures throughout the frontier. In response to these incursions, many Lakota in the late 19th century embraced a cross-tribal spiritual movement known as the 'Ghost Dance.' It was a system of rituals—including the namesake circle dance often performed here in the Badlands—believed to impede the encroachment of white settlers and deliver Natives from violence. But those efforts seemed futile by late 1890 as, just south of here, conflicts culminated in the Wounded Knee massacre where US forces killed more than 250 unarmed Lakota men, women, and children.

The conflict and ensuing tragedy is one of American history's ugliest chapters—but it bears reflection during Native American History Month as we ponder the Badlands' past, as vast and multilayered as the bedrock here.

Jim Henson, along with Ernie and Bert, rehearses for an episode of 'Sesame Street' in 1970 in New York City