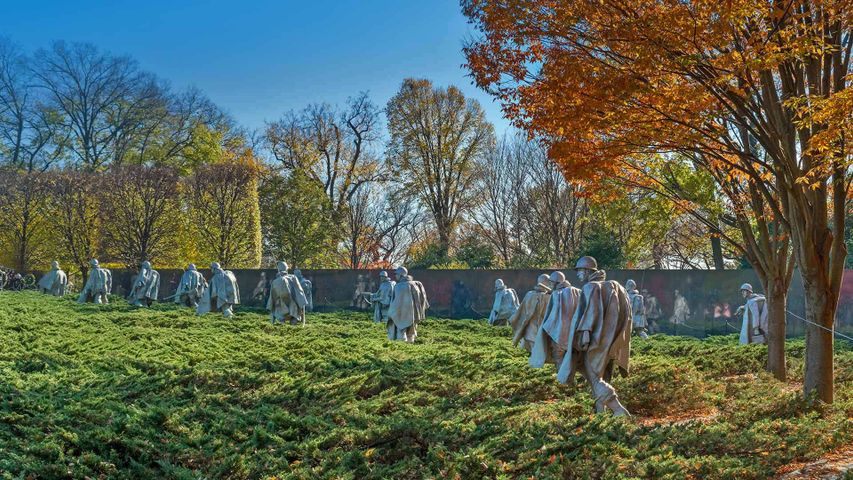 Today is Veterans Day, the day we set aside to honor those who have served in the United States Armed Forces. There are roughly 18 million living veterans in the US, including nearly 2.25 million who served during the Korean War. June 25 of this year marked the 70th anniversary of the start of the Korean War, when North Korean troops invaded South Korea. While 21 nations contributed forces to the United Nations' defense of South Korea, 90% of the troops who served in the Korean theater were from the United States.

The Korean War Veterans Memorial, shown here, was dedicated on July 27, 1995 in Washington, and consists of four parts: the mural wall, the pool of remembrance, the United Nations wall, and the statues. The 19 stainless steel statues were sculpted by Frank Gaylord of Barre, Vermont. They're approximately 7 feet tall and represent the various ethnicities of the recently integrated American forces who served in Korea. They also reflect a cross section of the US service divisions that fought in the war—they depict an advance party of 14 Army, three Marine, one Navy, and one Air Force personnel. The statues stand in patches of juniper bushes and are separated by polished granite strips, which give a semblance of order and symbolize the rice paddies of Korea.

While veterans account for only about 7% of the US population, they performed an outsized service to our country, and their commitment to the Constitution and the nation was total. Today would be a great day to find one and offer your thanks.