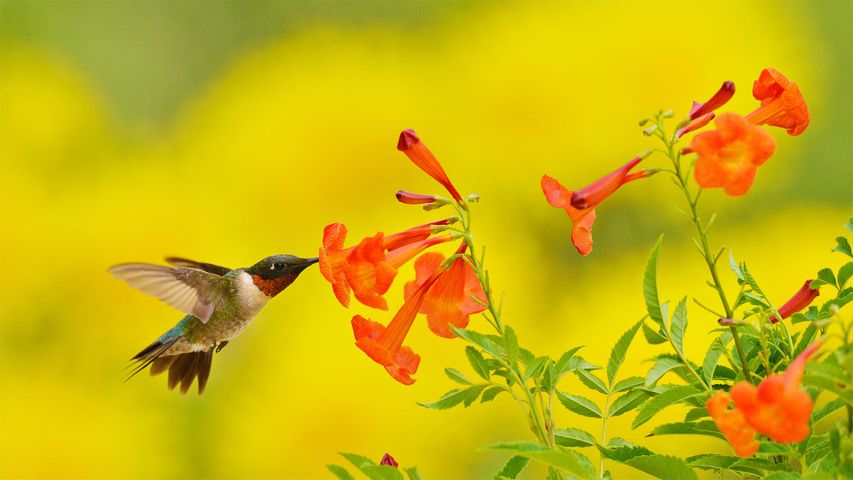 The ruby-throated hummingbird in today’s homepage image is snacking on some yellow bells, preparing for its long journey south for the winter. This time of year, the hummingbirds leave the northern latitudes of the US and Canada, migrating to the warmer climes of Mexico and Central America for the winter. Along their route, many will cross the Gulf of Mexico in a single 800-kilometre flight, which can take 18-22 hours of nonstop flying at speeds of up to 55 kilometres per hour. Tiny but fierce, the ruby-throated hummingbird weighs less than a nickel but beats its wings at an impressive 53 times a second on average.

Ruby-throated hummingbirds can eat twice their weight each day in sugar from flower nectar and feeders, with the occasional insect making up the rest of their diet. In the weeks before the migration, hummingbirds begin to eat more than usual to put on weight. The migration isn't triggered by the amount of food available, but by the length of daylight. The male hummingbirds start migrating first, and a few days or weeks later, the females and young follow. Those who live along the migration route, can help hummingbirds prepare for the journey by growing nectar flowers or putting out a hummingbird feeder—and are sometimes rewarded by a visit by these tiny fliers along their journey.