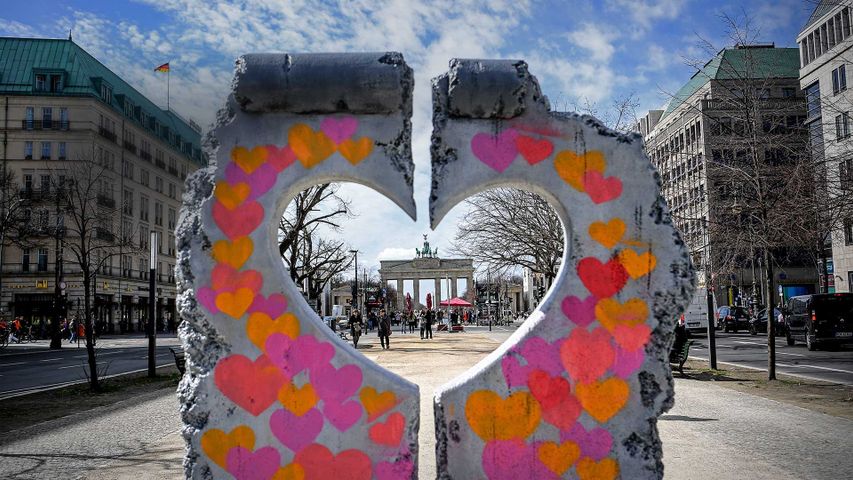 We're gazing at the Brandenburg Gate - a symbol of peace and unity - through a heart-shaped replica of a remnant of the Berlin Wall, a symbol of the political division that once marked the German capital. Today marks the 30th anniversary of the fall of the concrete barrier that once obstructed this view.

Although it stood for 28 years, the fall of the wall was sparked on November 9, 1989, when an East German official mistakenly announced a new relaxed travel policy during a broadcasted press conference. Within hours, thousands of hopeful East Berliners rushed the wall, overwhelming border guards who reluctantly opened the checkpoints. Soon Berliners from the East and West were on the wall, joyfully dancing together, breaking off pieces with their hands, hammers, and anything else they could use to crumble the cement. Shortly afterward, the wall finally came down and borders were opened.

Conditions that led to the wall began in the years following World War II, when Berlin was divided into Soviet-controlled East Berlin and the American, British, and French sectors known as West Berlin. Although East Berliners weren't allowed to emigrate, they managed to do so nonetheless, and by 1961, millions had left for life in the West, nearly bringing the East German economy to ruin. It was then, on August 13, 1961, that Berliners woke up to a barbed-wire fence cutting off West Berlin from East Germany, including East Berlin. Within days, East Germany fortified the barbed wire with concrete, eventually reinforcing it with an outer and inner wall, watch towers, and floodlights, while also extending it 45 kilometres across the city and beyond. For nearly three decades the wall separated families and entire communities. When it finally came down in 1989, it would be another year before both cities would eventually be reunified under the new Federal Republic of Germany.