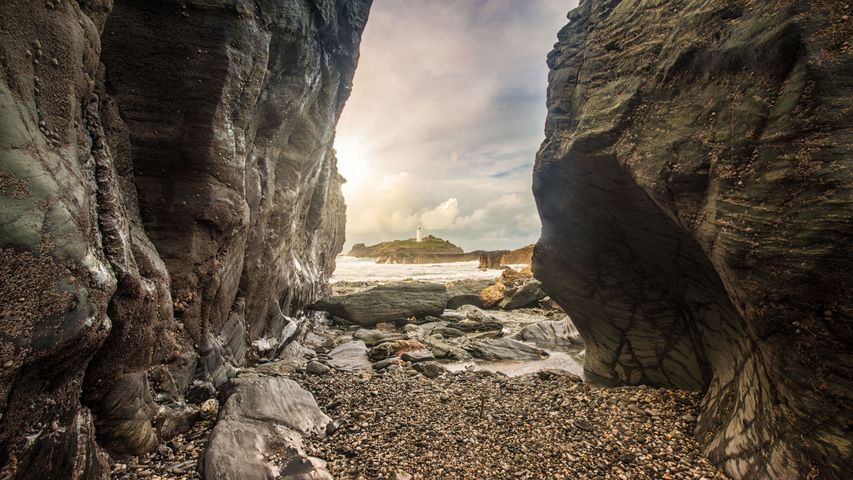 From between the rocks of St Ives Bay on south-west England’s Atlantic coastline we get a glimpse of Godrevy Lighthouse at sunrise. Sitting roughly five kilometres out to sea, in stormy weather its metre-thick walls repel the force of the Atlantic as it batters this small rocky island, situated next to a dangerous reef known as the Stones.

Godrevy Lighthouse is automated these days, but when it was built in 1859 there were three lighthouse keepers working on rotation here, two living in the cottage on Godrevy Island. Its construction followed centuries of shipwrecks and many deaths on the treacherous reef. It was the loss of the steamer Nile on 30 November 1854, with all passengers and crew killed, that ultimately led to the lighthouse being built.

The keepers were withdrawn and the lighthouse went automatic in the 1930s, and was converted to solar power in 1995. These days, the only inhabitants of Godrevy Island are seabirds and the hardy coastal wildflowers that appear in the spring. You can take boat trips around the lighthouse from St Ives, as a young Virginia Woolfe did, aged 10, in 1892. It is said to have inspired her 1927 novel To the Lighthouse – although the story was set on an island at the other end of the United Kingdom, on Skye.