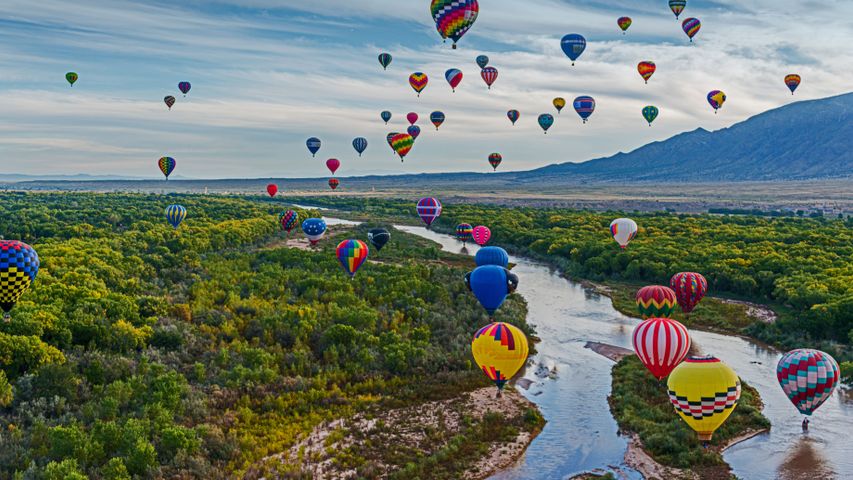 October means pumpkin fields, Halloween, leaf-peeping, and the World Series. But in Albuquerque, New Mexico, the beginning of October means a skyful of hot air balloons. The 50th Albuquerque International Balloon Fiesta is the largest gathering of balloonists in the world, with more than 500 hot air balloons going aloft this week. The now nine-day event got its start by launching 13 balloons from a shopping mall parking lot in 1972 to celebrate the birthday of a local radio station. It has easily become the biggest event of the year in Albuquerque, whose entire populace can view balloons in flight simply by stepping outside their homes and looking up.

The event is staged from the 365-acre Balloon Fiesta Park, on the northern outskirts of Albuquerque with the Sandia Mountains a few miles away. The Balloon Fiesta claims to be the most photographed event in the world, and it's easy to understand why. The highlight of the week is a mass ascension, in two waves, of all the balloons, decorated with every color and some shaped like animals or cartoon characters. In the age of jets and helicopters and rockets, this mass celebration of nearly silent flight reminds us that the magic of flying is not about speed, but simply reaching the sky.