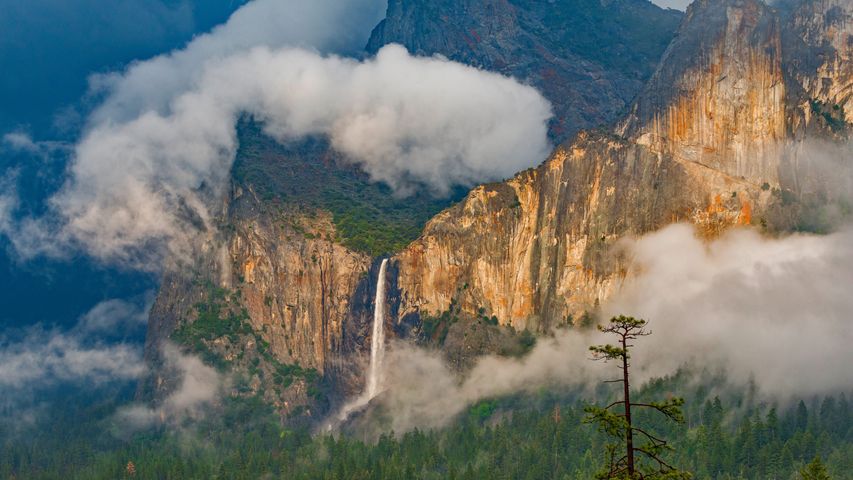 There are thousands of waterfalls in Yosemite National Park, but perhaps none are as well known as Bridalveil Fall. First things first: Don't call it 'falls' because then someone may think you were in Utah where another waterfall bears the surprisingly similar name, Bridal Veil Falls. Bridalveil, as seen in the photo, is often the first waterfall visitors to Yosemite encounter. It plunges 617 feet and flows year-round, fed with water from Ostrander Lake nearly 10 miles away. When the flow is light, brisk winds blow the water sideways. That's why the Ahwahneechee Native Americans, who have lived in the Yosemite Valley for centuries, traditionally called the waterfall Pohono, or 'Spirit of the Puffing Wind.'

When Yosemite was made a national park on this date in 1890, it not only preserved this jewel of the Sierra Nevada from being turned over to sheep grazing, it was also pivotal to the continued idea of protecting natural areas for the future. Scottish American environmentalist John Muir is credited with convincing President Benjamin Harrison to preserve the Yosemite Valley, and that success kicked off a string of conservation efforts that would eventually lead to the creation of the National Park System. Today, Yosemite's pristine wilderness is internationally known for mountains, granite cliffs, giant sequoia groves, and, of course, waterfalls.