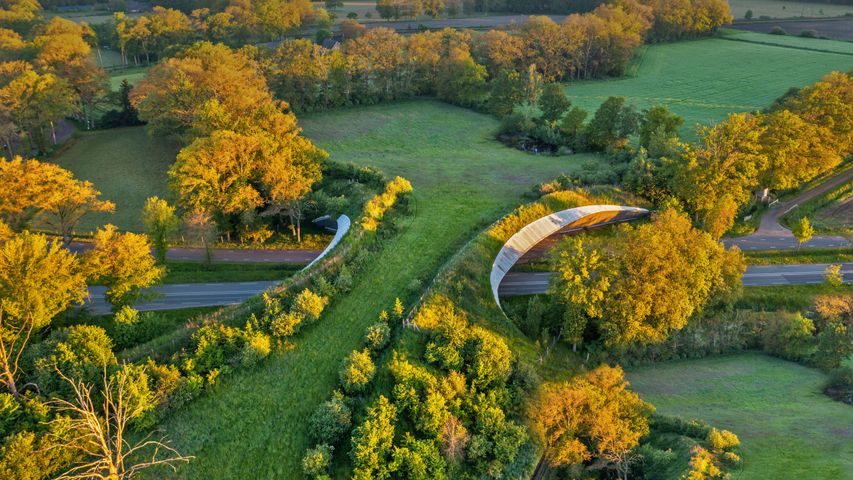 It’s not just chickens that cross the road. Wild creatures from frogs to elk have to roll the dice with death when they need to traverse the thousands of highways humans have threaded through wildlife habitat. Sadly, the dice don’t fall favourably for millions of animals each year, and collisions with vehicles cause fatalities for both them and the drivers who hit them.

Thankfully many countries now construct wildlife crossings—also called green bridges, ecoducts, ‘natuurbrug’ (like this one in Wierden in the Netherlands), and ‘écoponts’ (in France). These can be either overpasses or underpasses, and they are an expensive venture. Are they worth it? Well, officials in Banff National Park in Alberta, would say categorically yes. Over 20 years they built 44 bridges and underpasses so wildlife could cross the Trans-Canada Highway, which divides the park; traffic accidents involving wildlife dropped by 80 percent.

France built the first wildlife crossing in 1960 and the private highway company AFRR continues to construct elaborate safe passageways there, but the Netherlands leads the initiative, with an impressive 600-plus crossings, and counting. In fact, the Dutch can claim the honours for the world's longest animal crossing too—the Natuurbrug Zanderij Crailoo is an overpass that’s about a kilometre long and 50 metres wide. Now chickens and their four-legged friends can cross the road anytime, no questions asked.