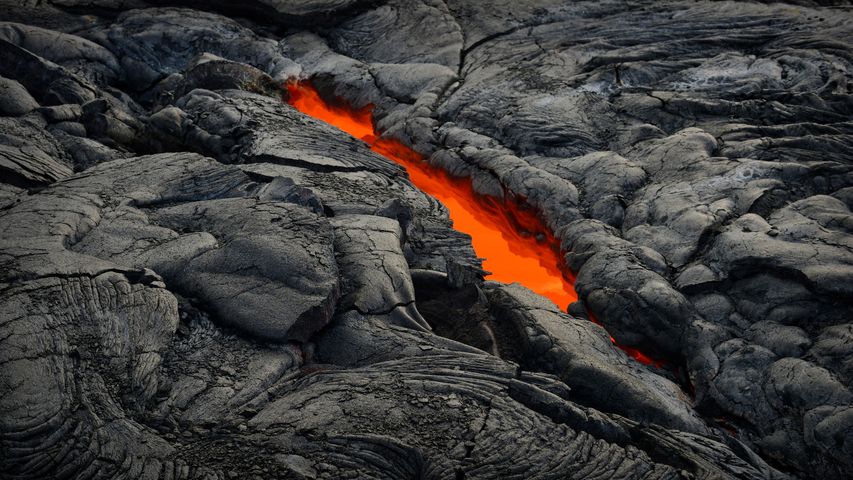 The most active volcano in the world. Hawaii Volcanoes National Park

The orange glow of a lava tube like the one pictured here is a frequent site on Hawaii’s Kilauea, the youngest volcano on one of the youngest islands on Earth. In near constant eruption for the last 40 years, Kilauea is widely considered the most active volcano in the world and is the main attraction at Hawaii Volcanoes National Park, which was created on this day in 1916. The park, which was designated an International Biosphere Reserve and a World Heritage Site, also includes another active volcano, Mauna Loa, the world’s most massive shield volcano–Mauna Loa last erupted in 1984. Together, they are among the most studied volcanoes in the world.

The volcanoes of the Big Island of Hawaii offer a real-time glimpse into the ongoing creation of the entire Hawaiian island chain, a process that has been underway for tens of millions of years. Hawaii as we know it, owes its existence to a volcanic hotspot on the seafloor. Magma seeps from this hotspot and turns into solid rock. Once enough magma is extruded, the rock breaks the surface of the sea and becomes an island. The island continues to grow until the Pacific tectonic plate moves the island off the hotspot. The hotspot remains stationary, constantly creating new islands. In fact, the next Hawaiian island, named Loihi, is about 30 kilometres from Hawaii and 915 metres below the surface of the ocean. In less than 100,000 years, it is expected to replace the Big Island as the youngest island in the chain, and it too will have its turn at hosting visitors who buy timeshare condos.

Hawaiian religion credits the creation of Hawaii to Pele, the goddess of fire and volcanoes. Possessing a fiery temper and a passionate nature, she is said to make her home in the Halema’uma’u caldera here on Kilauea. From her volcano home she controls the flow of lava and frequency of eruptions. According to modern legend, she sometimes wanders near the park as an old woman wearing a red muumuu, with a white dog, as a warning that a new eruption is soon to come.