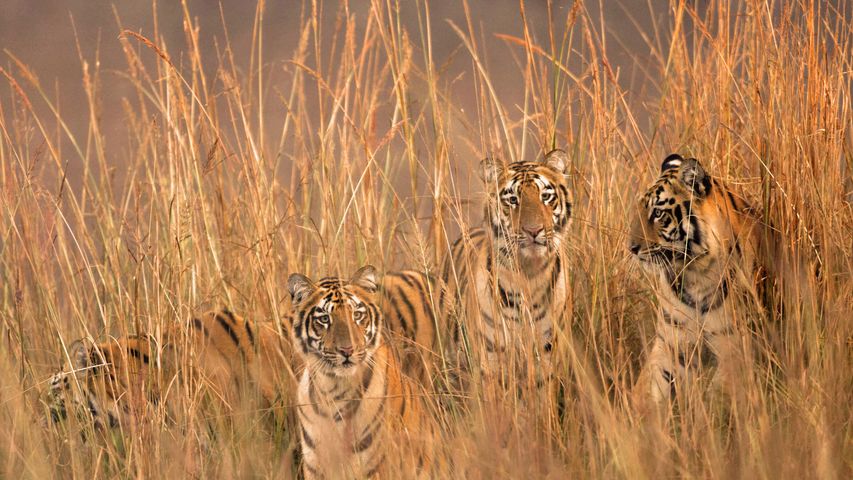 Famously solitary, tigers seldom live in groups unless they’re still cubs staying close to their mother. This rare streak, as a group of tigers is called an exception. So much so, they became the subjects of a TV documentary called ‘Girl Gang of Telia.’ Today, on International Tiger Day, we’re featuring these tigress sisters from the Tadoba Andhari Tiger Reserve in central India, a protected area that is part of Tadoba National Park.

Tiger Day was created in 2010 to bring attention to conservation efforts for this endangered animal. According to the World Wildlife Fund, only about 3,900 tigers are left in the wild (compared to at least 20,000 lions left in the wild), their decline caused by poaching and the fragmentation and destruction of their habitat by people. The tiger’s natural territory once consisted of almost all of Asia and parts of the Middle East but has been reduced by 93 percent. Of the nine known subspecies of tiger, at least three are now extinct (and a fourth is likely extinct). Most tigers, like this gang of sisters, live in isolated, protected pockets. The largest number of wild tigers, by far, live here in India, where between 70%-80% of the world’s tiger population can be found. Russia and Bangladesh are a distant second and third. Although tiger mothers give birth to up to four cubs every two years, only half of all cubs survive into adulthood.

Tigers are the largest of all cats, weighing as much as 660 pounds, and the largest terrestrial animal whose diet consists solely of meat. They are ambush predators who hunt mostly at night, relying on stealth and strength to take down large prey like deer, boar, buffalo, and even crocodiles—tigers are famously good swimmers. Their stripes serve as good camouflage in forests and tall grass, and each tiger’s stripes are as unique as fingerprints are among people. Mona, Seeta, Lara, and Sonam, the tigress sisters, began to hunt together to improve their chances of landing prey. This behaviour is typical of lions but almost unheard of for tigers, proving they can adapt in order to succeed.