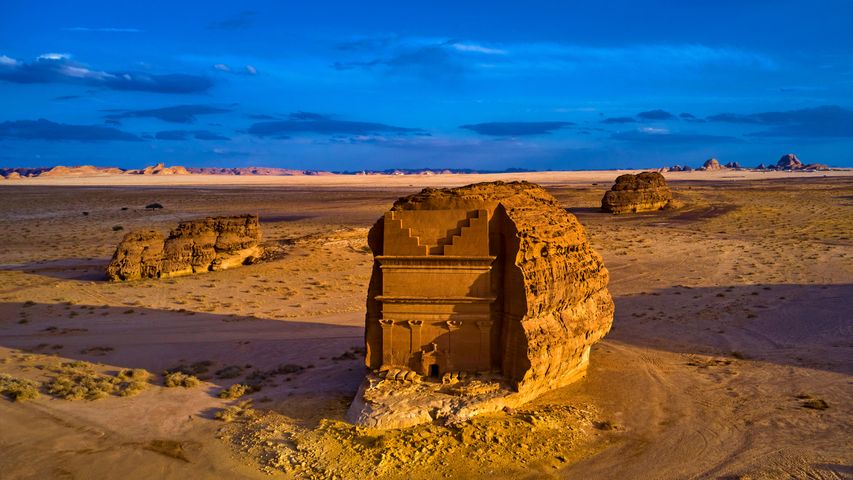 About 2,000 years ago, Mada’in Saleh, or Hegra as the Romans called it, was a thriving city of the Nabataean Kingdom, and a centre for the trade of spices, incense, and myrrh, a valuable tree resin used to make perfume and medicine. The Nabataeans were Arab people whose precise origins are unknown. They lived in northern Arabia and the Southern Levant. Mada’in Saleh was their second-largest and southernmost city after Petra, their capital city to the north. About halfway between Petra and Mecca, Mada’in Saleh served primarily as a trading crossroads and was instrumental in establishing the Nabataeans as prosperous middlemen to the rest of the ancient world.

Today it is one of Saudi Arabia’s most celebrated historic treasures, and a UNESCO World Heritage Site, distinguished by more than 100 tombs with ornate facades, carved from sandstone outcroppings on the outskirts of the city. The smallest is less than three metres tall, the largest more than 18. Most of the tombs were carved in groups, but this especially embellished monument is relatively isolated, which is why today it’s known as the Qasr al-Farid (the Lonely Castle). Here in this windswept desert, the bustle of merchants and the caravans full of spices are long gone, but these hand-carved boulders rising abruptly out of the landscape remain as evidence of a time when all roads led to Hegra.