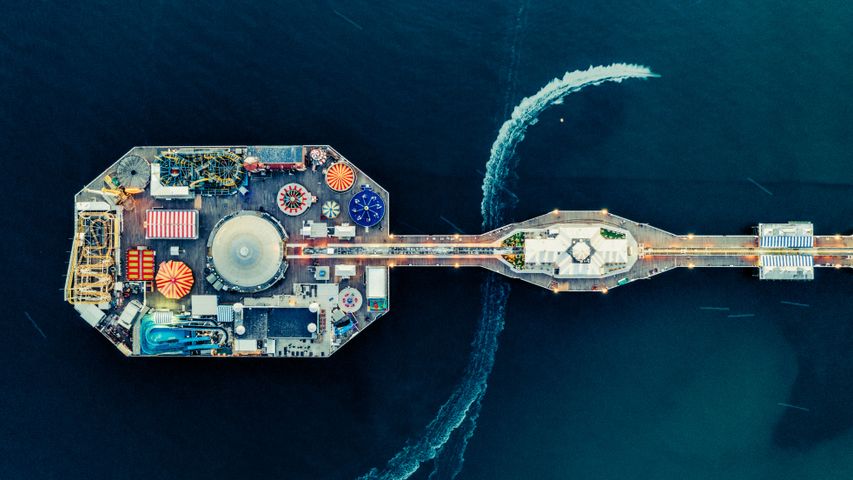 Our homepage today is a bird’s eye view of Brighton Palace Pier, also known as Brighton Pier, which juts out from the pebbled beach here in this popular south coast city. This Victorian-era structure, built in the 1890s, is still going strong as one of the country’s most popular coastal attractions. Once home to a concert hall and theatre in which a young Charlie Chaplin and Stan Laurel performed early in their careers, these days it’s packed with fairground rides, arcades restaurants and bars. But it still serves up a healthy dollop of nostalgia, not to mention candy floss and Brighton rock, for day trippers to Brighton and Hove.

A Grade II-listed building, the pier plays a major role in Brighton’s economy, employing hundreds of people. It’s also had a starring role in British culture over the decades, from Graham Greene’s novel Brighton Rock to the film Quadrophenia and performances by the Spice Girls. It sits to the east of what remains of the West Pier, largely destroyed by fire and storms in 2002 and 2003, but which still forms a photogenic silhouette on the horizon. The West Pier is one of scores of piers that once dotted the British coast, but which have been lost to the elements over the years. Brighton Palace Pier is one of the survivors that continue to draw in beach-goers and daytrippers, looking for a stroll out over the water and some classic seaside entertainment.