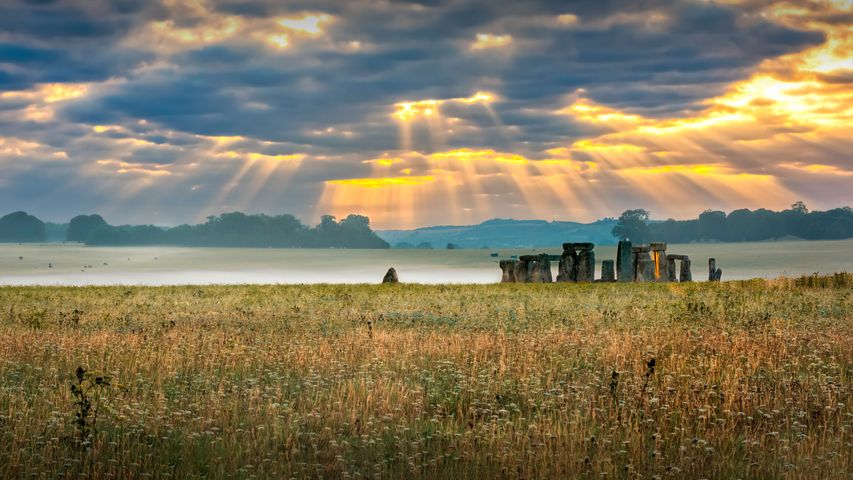 Stones on the solstice. Summer Solstice

All hail the longest day of the year! We’re at Stonehenge in Wiltshire, a traditional spot to meet up and celebrate all things summer solstice. This iconic collection of standing stones has stood over the landscape here since Neolithic times and is just part of the wider 6,500-acre Stonehenge and Avebury Unesco World Heritage Site. No-one is sure why they were put there or how, although some of the more creative theories involve aliens and giants. Whatever the reason, crowds still gather here thousands of years later, to watch the Sun rise from behind the circle’s famous Heel Stone on the summer solstice.

This ancient mystical site is thought to have been set up around 2500 BCE and the stones were carefully designed to align with the movements of the Sun. It’s not the only ancient monument locally which is astronomically aligned, nearby Woodhenge and the Southern Circle at Durrington Walls are also aligned on the midsummer and midwinter sunrises. We may never know for sure why, but it’s likely that feasts, rituals and celebrations were held relating to the seasons and the changing position of the Sun.

The summer solstice has been celebrated in different ways in many different cultures for centuries, so feel free to usher in summer however you want, bidding adieu to the dark and cold and welcoming warmer, sunnier days.

A Giraffe in South Africa