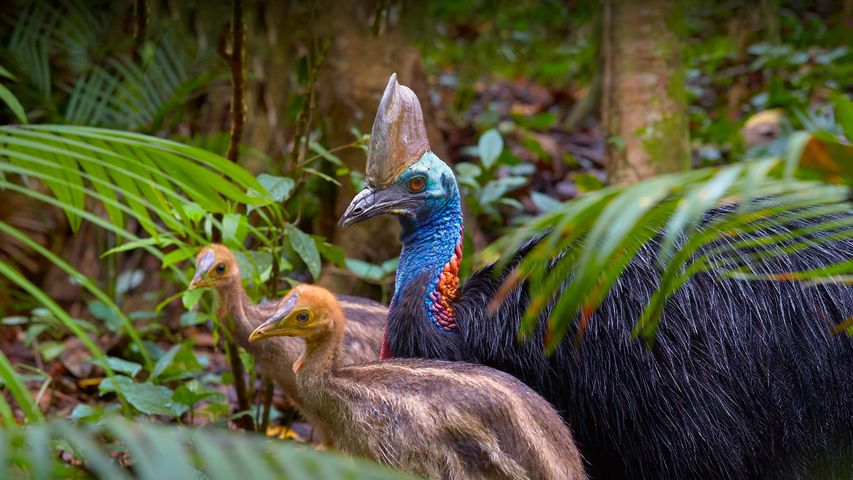 Happy Father's Day! To celebrate, we're venturing into a tropical forest in Queensland, Australia, to visit one of nature's most protective fathers, the southern cassowary, the largest of three species of this flightless bird. The cassowary has earned the title of the 'world's most dangerous bird' because of its sharp, dagger-like claws and aggressive behavior. Cassowaries, like this doting father and his chicks, are notorious for attacking and sometimes killing domestic animals and even humans. In the wild, adult birds are so belligerent that they have no natural predators. Their young, however, need some protection. That's when dad steps in.

Once a mother cassowary lays eggs, she essentially abandons the family and moves on to start another. Cassowaries are solitary birds, so this abandonment of the chicks comes naturally. But dad understands his children need some assistance. He'll sit on the eggs for upwards of 50 days, making sure to add or remove nesting material to keep their home at the perfect temperature. During this time, he's so attuned to keeping the eggs safe, he often skips meals. Upon hatching, chicks can stay in the nest for nine months. Dad stays by their side the whole time, often taking them out to feed and to teach them the ways of the world.

Snakes, lizards, and eagles that try to capture a cassowary chick are often met by extremely aggressive kicks with those claws that can eviscerate the would-be attacker. Once the chicks come of age, papa cassowary chases them away and gets ready to do it all again with another brood. While there are no reports of his kids returning to deliver 'World's Greatest Dad' mugs or ashtrays, the male cassowary's dedication to fatherhood has earned our admiration.