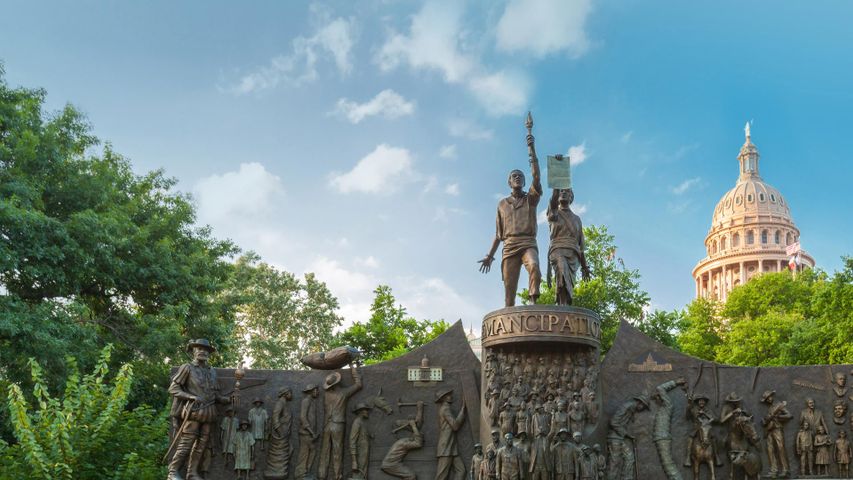 Juneteenth, also known as Freedom Day, originated June 19, 1865 to recognize the day the remaining enslaved African Americans in the Confederacy were made aware of the signing of the Emancipation Proclamation more than two years prior. This occurred in Texas—the most remote of the Confederate states—when Union troops arrived in Galveston Bay and read federal orders declaring that all enslaved people were free. Once a mostly regional observance, Juneteenth has in recent decades become a much broader celebration of African American freedom. This year in particular, it's seen as a way to express support for the African American and Black community during a time of widespread protests against systemic racism and police brutality.

To celebrate Juneteenth this year, we've come to the Texas African American History Memorial on the State Capitol grounds in Austin, Texas. The memorial was created by Ed Dwight, a sculptor, former engineer, Air Force test pilot, and the first African American astronaut candidate. Dwight's sculpture, which was unveiled in 2016, depicts the broad sweep of African American history in Texas, from the 1500s to the present—centuries of enslavement, the Civil War, and legalized oppression and segregation, to current struggles and achievement. That history starts on the left side of the sculpture with Estevanico, an enslaved North African explorer who is thought to be the first person from Africa to walk on the soil of present-day Texas, in 1528.

The monument also depicts the events of June 19, 1865, when the last enslaved people of the United States were finally declared free. Juneteenth has been a Texas state holiday since 1980, though it's long been celebrated in the Lone Star State. Today most states have passed legislation recognizing Juneteenth as either a state holiday or day of observance and many are advocating for it to be made a federal holiday.