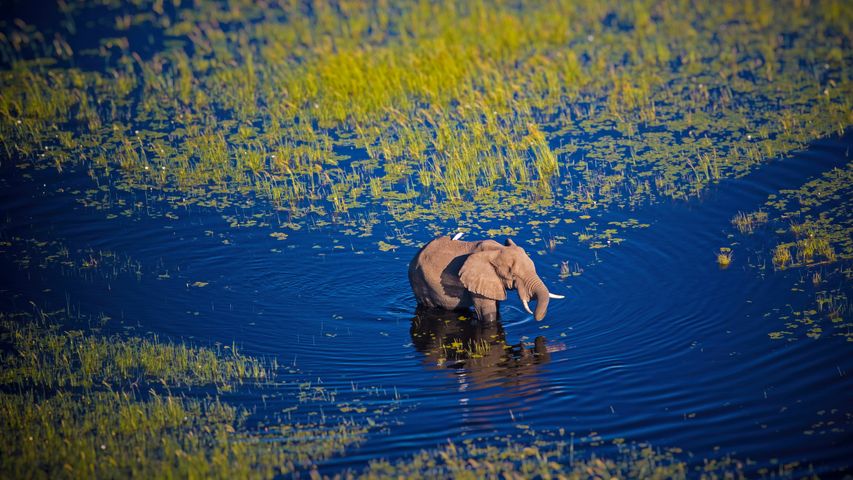 At a glance, this might look like some ordinary swamp, but the Okavango Delta in the African nation of Botswana is a veritable miracle of nature. Unlike most river deltas, the Okavango doesn’t drain into any sea or ocean, but rather empties into the open savannah. This elephant, and just about every African animal you can name, owes its existence to this annual wetland. ‘Annual,’ because the marshland of the delta swells threefold to its full size but once a year, between March and July, when the seasonal rains from the highlands of Angola flow downhill 1,207 kilometres until they flood the arid savanna of northwest Botswana. The wildlife drawn to this life-sustaining water includes lions, leopards, cheetahs, rhinos, giraffes, zebras, hippos, wildebeests, hyenas, crocodiles, impalas, and of course elephants, the planet’s largest land animals.

By far, most of the world’s elephants—more than 400,000—live in Africa, and Botswana is the country with the largest population of African elephants. The majority are bush elephants, larger than their cousins, the African forest elephants who live in the Congo Basin. Bush elephants have concave backs and their tusks curve outward, while forest elephants have straight backs and tusks. Both are endangered by habitat loss and poaching. Their population is about a tenth of what it was at its peak in the last century.

The protected Moremi Game Reserve makes up a large portion of the delta. The rest is protected by a mosaic of other preserves called Wildlife Management Areas. In 2014, the Okavanga Delta was placed on the UNESCO World Heritage List. The amount of water that fills the delta is estimated to be 10.8 cubic kilometres. Eventually much of this water will be consumed, absorbed, and evaporated, and the delta will once again more closely resemble the savanna around it.