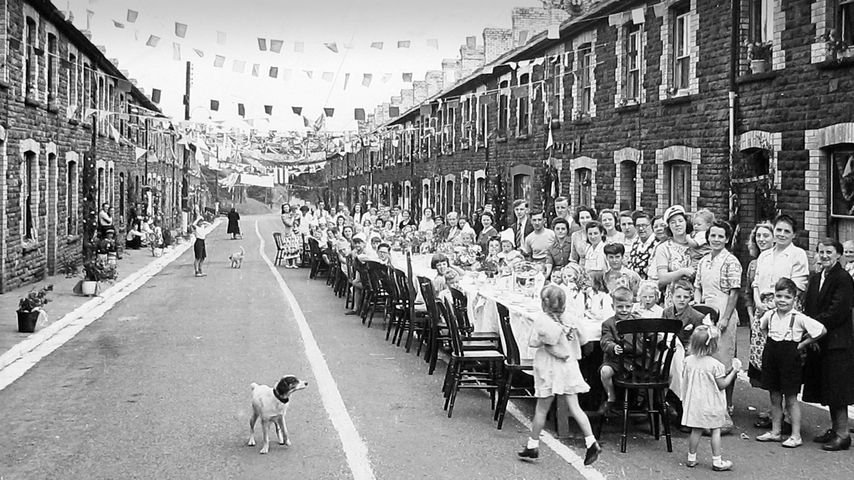 As the Queen’s Platinum Jubilee celebrations draw to a close, neighbours across the UK will sit down to tables festooned with bunting and laden with food for The Big Jubilee Lunch. Street parties have been thrown to celebrate major events for more than a century, with roots in earlier “street dressing” traditions. But it was the ‘peace teas’ arranged in 1919 for children to celebrate the end of WWI that began the tradition of street parties as we know them. More followed in 1935, for the Jubilee of King George V, in 1937 for the coronation of George VI, and for VE and VJ days at the end of World War Two.

The association of street parties with royal milestones was finally cemented with the coronation of Queen Elizabeth II in 1953 – an event seen being celebrated in our homepage image. Her coronation at Westminster Abbey was the first to be televised and was watched by millions around the world. People crowded round neighbours’ televisions to watch the ceremony before celebrating at street parties across the country.

Street parties would continue throughout the 20th century for the Queen’s Jubilees, royal weddings and the turning of the Millennium, allowing neighbours to chat and have fun, strengthening community connections. In 2009 the Eden Project sought to put things on a yearly schedule with the launch of The Big Lunch, to encourage people to get to know each other at events held on the first weekend in June. This became the Big Jubilee Lunch during the 2012 Diamond Jubilee celebrations, returning ten years later for the Platinum Jubilee celebrations.

Christmas decorations in the medieval cloister at Gloucester Cathedral