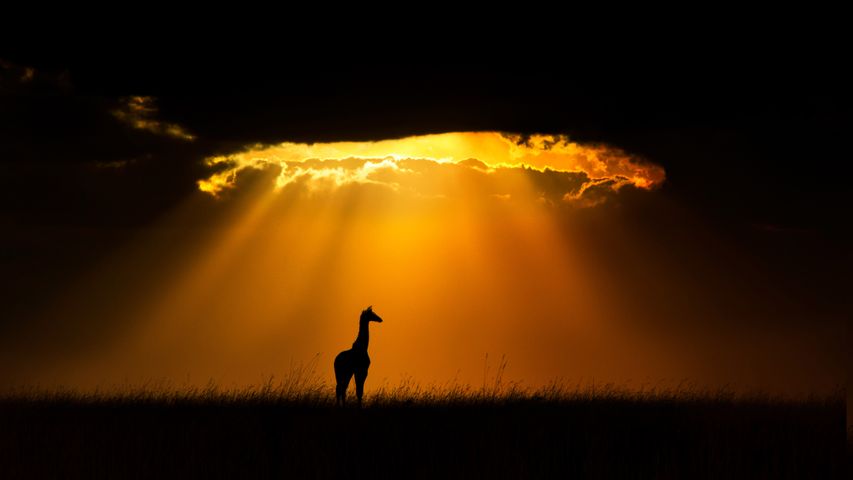 Solo on the savannah. Giraffe in Maasai Mara, Kenya

Our lonely giant is silhouetted on the Maasai Mara in Kenya, one of the world’s most important wildlife conservation areas. The preserve was established in 1961 and adjoins the Serengeti National Park in Tanzania - together, the Mara-Serengeti ecosystem protects some 9,700 square miles. As well as giraffes, the Maasai Mara is home to large populations of elephants, lions, cheetahs, rhinos, wildebeest, hippos, crocodiles, zebras and many more creatures.

While some zoologists consider the Masai giraffe its own species, most authorities recognise just one species of giraffe with nine subspecies. Masai giraffes like this one are the tallest of those, with males reaching heights of more than 18ft. They range from southern Kenya, south through the Serengeti and through all of Tanzania. Though not considered endangered by the Union for Conservation of Nature, giraffes are a ‘vulnerable’ species, and some of the subspecies may be nearly extinct.

Until the late 19th century, giraffes were commonly known as cameleopards, due to the mistaken belief that a giraffe was a cross between a camel and leopard. But if you’ve ever tried to get a camel and a leopard to go on a first date, you’d know how unlikely this is.

High angle view of Nant-y-Moch dam and reservoir, near Aberystwyth

Orcus in the Gardens of Bomarzo in Italy