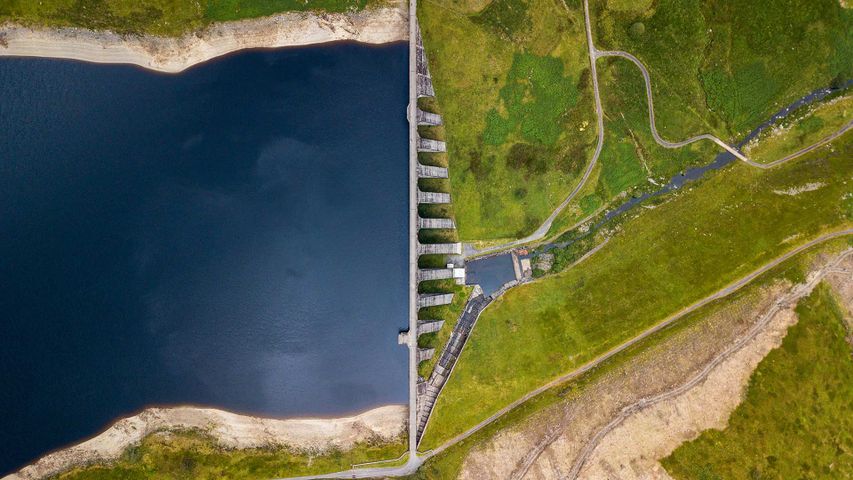 High angle view of Nant-y-Moch dam and reservoir, near Aberystwyth

We’re looking down on the Nant-y-Moch reservoir and dam, part of the huge Rheidol Hydro Electric scheme which begins high up in the Cambrian Mountains in Wales, more than 750m above sea level. The 52m (170ft) high concrete dam brings a dramatic component to the scenic valley of the Rheidol river, as well as holding back up to 26,000 million litres of water. Covering 680 acres, Nant-y-Moch (which translates as the pig’s stream) is the larger of two reservoirs which help funnel rainwater down the mountains.

Built in the early 1960s, the scheme – which includes the lower Dinas reservoir, as well as power stations, pipelines, aqueducts and dams - generates enough renewable energy to supply thousands of homes a year. Hydroelectric power uses the energy from flowing and falling water to spin turbines and generate electricity and was first used in Britain in 1878, in Northumberland. Today most UK hydropower is generated in plants found in the Welsh countryside and the Scottish Highlands.

Orcus in the Gardens of Bomarzo in Italy