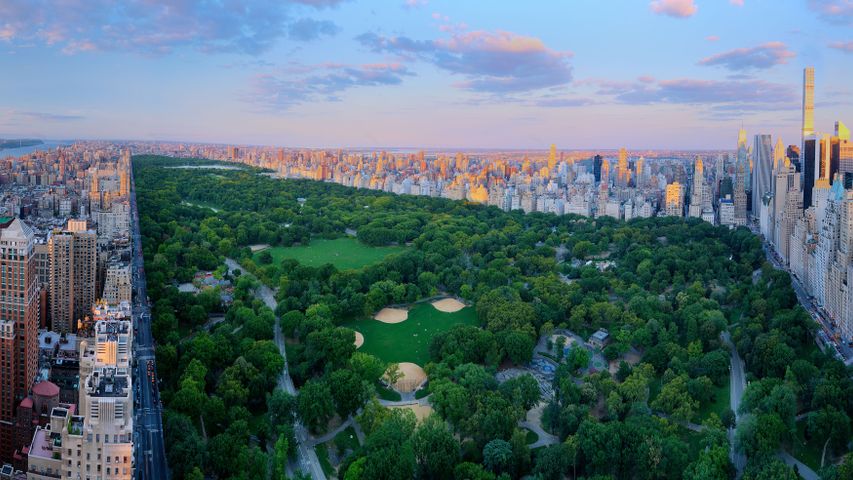 An oasis in the city. Landscape Architecture Month

April is World Landscape Architecture Month, and to mark the occasion, we're hovering above this masterwork, probably the most famous urban park in the world. Central Park is not the oldest, or the biggest, but no city park is more iconic. About 42 million people visit the park every year, and it's the most filmed location in the world. What American movie is complete without a scene of a stroll through its unmistakable grounds?

Central Park was designed by Frederick Law Olmsted and Calvert Vaux, considered the fathers of landscape architecture. It was their first project together. They later collaborated on many large parks and college campuses all over the US, but Central Park is no doubt their most enduring work. It took 19 years to build and was completed in 1876.

Although the landscape of boulders, ponds, woods, and gently sloping hills appears to be nature's original design, the land was greatly altered to create what you see today. About 5 million cubic yards of soil and rock had to be removed. Land had to be drained and leveled. More gunpowder was used to carve the land than was used in the Battle of Gettysburg during the Civil War. Nearly 150 years later, the park is still where the city plays. Residents and visitors get to enjoy two ice skating rinks, a carousel, zoo, outdoor theater, tennis courts, ballfields, formal gardens, rustic trails, and even a castle. Manhattan's crown jewel might just be the best backyard renovation ever.