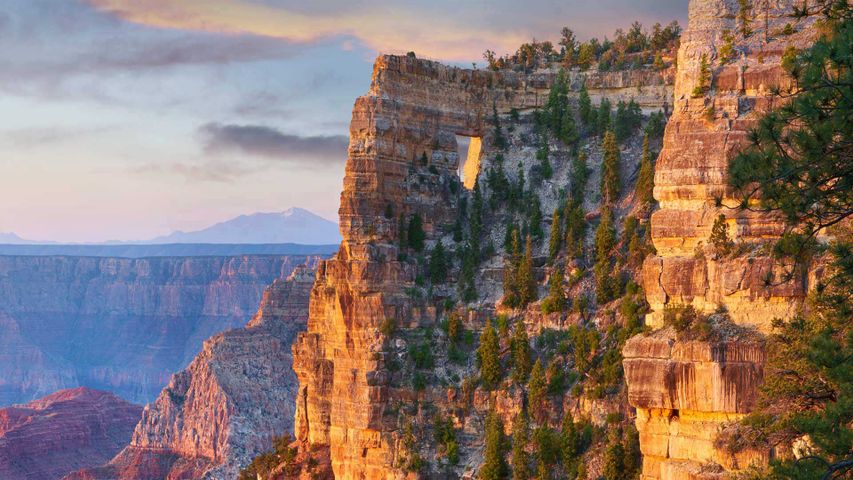 On the National Park Service's Founders Day, we're here on the North Rim of Grand Canyon National Park in Arizona peering out at the stunning vista. Can you see the rectangular hole in the canyon wall near the top of the image? That's Angels Window. Brave hikers can make their way up to the trail above it, but the window itself is best viewed from various points along the North Rim. Far down below is the Colorado River. Beginning about 6 million years ago, it gradually carved downward through countless layers of sedimentary, igneous, and metamorphic rock. The Colorado and its tributary streams continue to deepen and widen the Grand Canyon even today.

The first national park, not only in the US but also in the world, was Yellowstone, which was designated as a park in 1872. It was followed by Sequoia, Yosemite, and Mount Rainier. While the Grand Canyon seems like an obvious choice for a national park, land and mining moguls kept it from becoming protected as a park for years. It finally became a national park in 1919, three years after the National Park Service was created on August 25, 1916. Each year on August 25, Founders Day is celebrated in all the national parks, where entrance fees are waived in honor of the occasion.

The Tasman Sea from Punakaiki on South Island, New Zealand

On the John Muir Trail near Mammoth Lakes, California