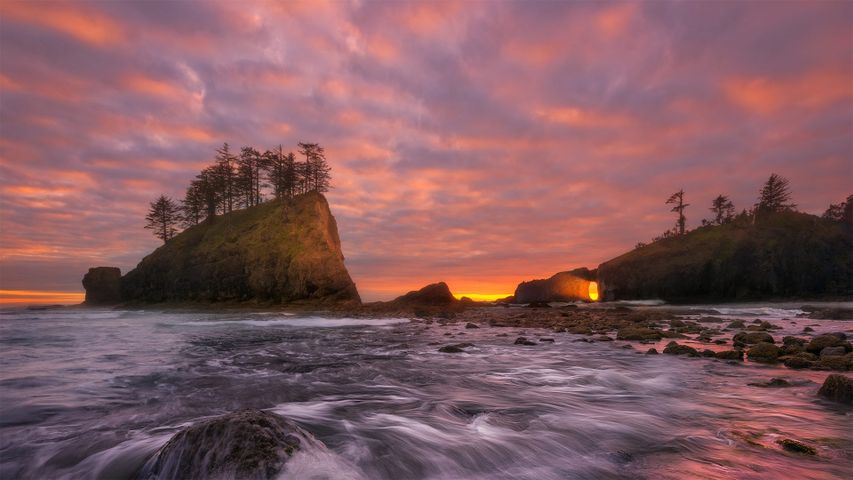 A wild, craggy corner of the United States

The sun is setting here on the west coast of Washington state’s rugged Olympic Peninsula, where more than 3,000 square miles (7770 square kilometres) of marine waters are protected as part of the Olympic Coast National Marine Sanctuary. Wondering where exactly we are? Look at a map of the United States and draw your finger up the west coast until it ends where the Strait of Juan de Fuca meets the Pacific Ocean. Those final 135 miles (217 kilometres) of shoreline form the landward boundary of the sanctuary, which also extends seaward 25 to 50 miles.

This area attracts more than 3 million visitors a year. Many come to catch glimpses of the 29 species of marine mammals that reside in or migrate through this area, like humpback, gray, and orca whales, plus seals, sea lions, and sea otters. Salmon and halibut thrive here, as do any number of seabirds that make their nests in the craggy rock walls, seagrass, and treetops. At low tide, visitors explore tidepools teeming with life. This sanctuary is more than an ecological resource, it's also home to vibrant Native American tribes. The Makah, Quileute, Hoh, and Quinault have been here for centuries, long before the first English sea captains spotted the coast and gave it its current name.