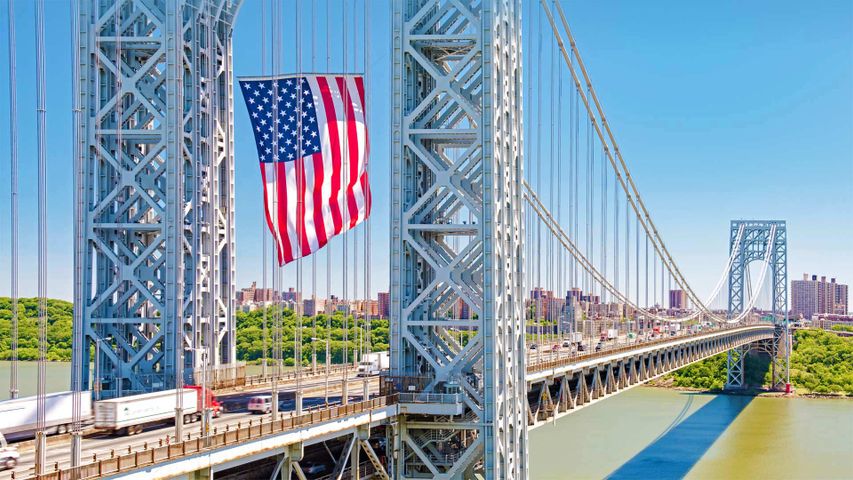 Because it's Flag Day in the US, we're at the site of what's believed to be the largest free-flying US flag in the land. It's crowning the George Washington Bridge connecting Manhattan with Fort Lee, New Jersey. For those crossing the Hudson today, Old Glory will be on full display on the New Jersey tower, at least between the hours of 7 AM and 1:15 PM, after which New York Port Authority workers will reel the 60-by-90-foot, 450-pound nylon flag back into the tube where it's housed, suspended hundreds of feet above the busy crossing. The flag is set to come out again on July 4, and if you can't catch it then, you'll still have a chance to see this enormous flag a few more times this year, as it is scheduled to fly again on Labor Day, September 11, and Veteran's Day.

Americans have been observing Flag Day every June 14 since 1949, when it was established by an act of Congress. The date marks the occasion in 1777 when the Stars and Stripes were adopted as our nation's ultimate symbol. While the design of the US flag has undergone several changes since then, it's been mostly stable since 1818, when Congress settled on the 13 white and red stripes, plus a star for every state. The current 50-star version of the flag has been in effect since 1960, a year after Hawaii officially joined the union.