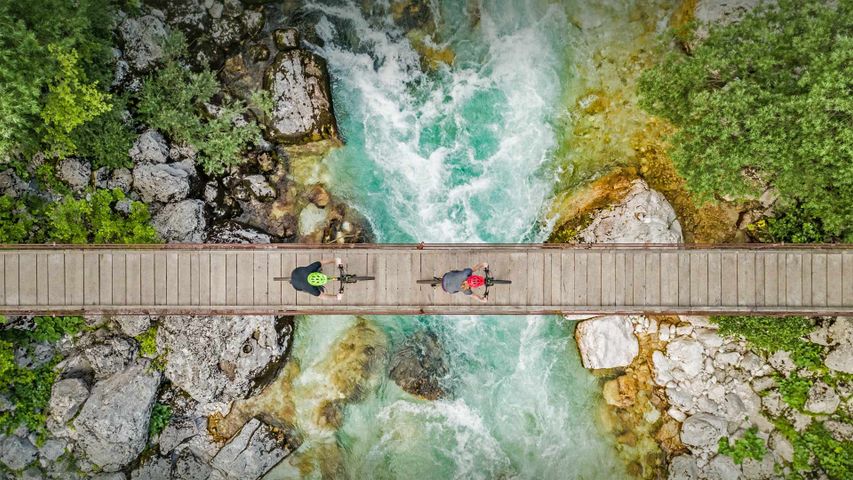 In honor of the UN's World Bicycle Day, we're at Triglav National Park in Slovenia, with a bird's-eye view of riders crossing this dubious-looking wooden suspension bridge over the blue glacial water of the river called Soča. Protecting some of the most magnificent mountain landscapes of the Julian Alps, Triglav is the country's only national park, but it's a stunner. Running along Slovenia's northwestern border with Italy, Triglav was first protected as a 'conservation park' in 1924, then made a national park in 1981. The park gets its name from the mountain at its heart, Triglav, long considered a symbol of Slovenia and of Slovene identity.

Since 2018, the UN General Assembly has recognized June 3 as World Bicycle Day to honor 'the uniqueness, longevity and versatility of the bicycle, which has been in use for two centuries.' The bicycle has gone through many iterations since Karl Drais created the brakeless, pedalless bike forerunner called a 'vélocipède' in 1817. The German inventor would likely be floored by today's variety of bike options, from new lightweight road bikes to heavier mountain bikes with fat, knobby tires designed to handle rougher terrain. More than 200 years after Drais introduced his two-wheeled contraption, bicycles remain as popular as ever. Chances are there's one just waiting for you to take it for a spin, and what better day to do so than World Bicycle Day?