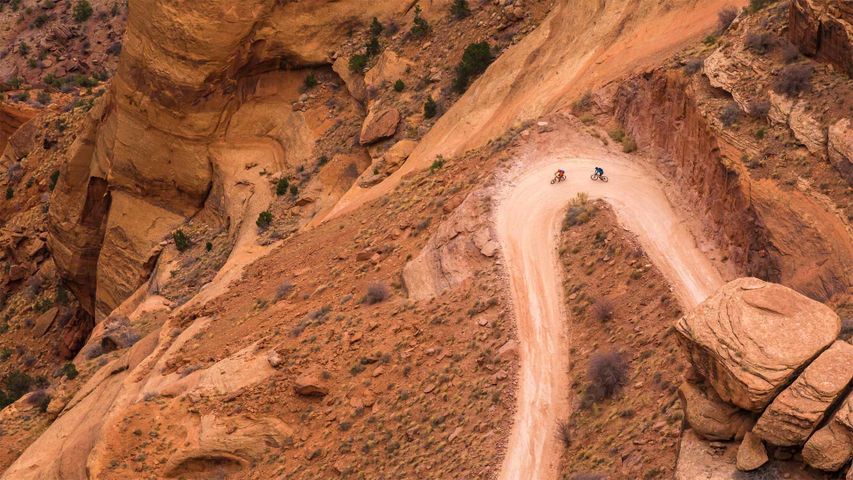 In honor of World Bicycle Day, we share a bird's-eye view from Utah of two mountain bikers riding on the Shafer Trail switchbacks of White Rim Road in Canyonlands National Park. In 2018, the UN officially recognized 'the uniqueness, longevity and versatility of the Bicycle, which has been in use for two centuries, and that it is a simple, affordable, reliable, clean and environmentally fit sustainable means of transportation.'

German Karl von Drais is credited with creating the first version of a bike in 1817; it was a heavy wooden contraption that the rider pushed forward with his or her feet. It had many names—the 'draisine,' 'velocipede,' and 'dandy horse'—and it was a fad for a few years, but eventually the bike was banned because it was too dangerous (no brakes!).

The bicycle has gone through many iterations since then, from the less-than-comfortable 'boneshaker' in the 1860s, followed by the 'penny-farthing' with its huge front wheel, to today’s popular fatbikes and e-bikes. During one of America's biking booms, in the 1970s, more bikes were sold than cars. Today bicycles remain as popular as ever, so whether it's for recreation or transportation, the bicycle is here to stay.