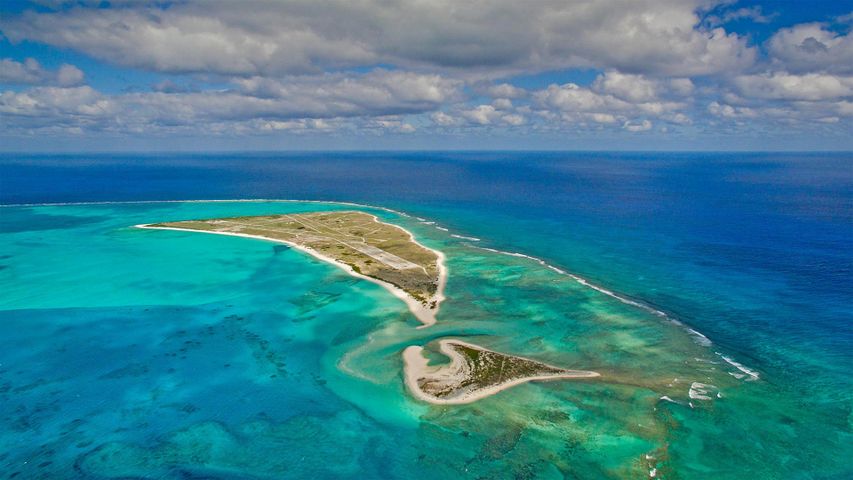 Islands that turned the tide

Pictured here are Eastern Island and Spit Island, the two smallest of the three islands in the Midway Atoll, located about 3,200 miles west of San Francisco and 2,500 miles east of Tokyo. The atoll was formed as a shield volcano roughly 28 million years ago. Over the millennia, the volcanic island subsided under the sea but the coral reef encircling it has maintained itself and protected the atoll's three, low-lying islands (Sand Island, not shown in our photo, is the third).

Still etched onto the surface of Eastern Island are some of the airstrips that made Midway the United States' most strategic toehold in the central Pacific in the early days of World War II. Over June 4-7, 1942, the Battle of Midway was fought here—and in the surrounding waters—between the US and Imperial Japanese navies. Regarded by military historians as one of the most consequential naval battles ever, it involved hundreds of aircraft, seven aircraft carriers, two battleships, and over 80 cruisers, destroyers, and submarines. When it was over, the US had sunk all four of the Japanese fleet aircraft carriers, a heavy cruiser, nearly 250 Japanese planes, and turned the tide of the war in the Pacific. Today the atoll is encompassed by the Papahānaumokuākea Marine National Monument, a 583,000-square-mile protected zone that supports over 7,000 species of plants and animals.