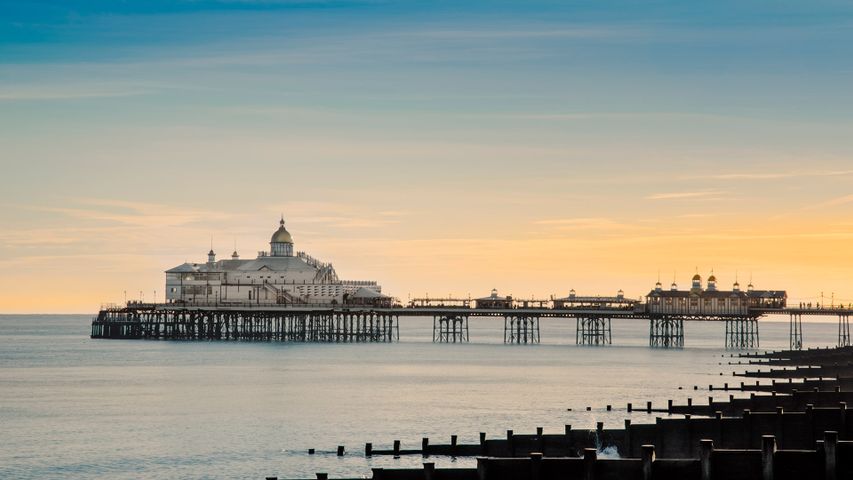 Peace at the pier

Welcome to the blue skies and seafront splendour of Eastbourne on England’s south coast, the UK’s sunniest place. This tranquil scene shows the town’s iconic, Grade II-listed Victorian pier, designed by noted pier-builder Eugenius Birch. Eastbourne Pier has been serving up entertainment and sweeping views of the English Channel since it opened in 1872. Like many British piers, it has been through rather a lot since then.

It had not long been open when much of its shoreward end was swept away by a storm in 1877 and had to be rebuilt at a higher level. The pier was damaged by an exploding mine in the 1940s, its theatre was destroyed by fire in 1970 and another devastating fire in 2014 destroyed its large arcade. Since then, the damaged buildings have been replaced by an open deck area.

The pier is roughly 300m (nearly 1,000ft) long and was built on stilts which rest in cups on the seabed, allowing the whole thing to move in rough weather. In the heyday of British seaside resorts, paddle steamers ran trips from the pier along the coast and across the Channel. Sadly, of the 101 British ‘pleasure piers’ built between 1814 and 1957 only about half are left, while others have fallen victim to fires, the sea and storms.

A living bridge in the East Khasi Hills district of Meghalaya, India